This is truly a sad day for art, especially in this town. Troy Dalton was a masterful painter, I mean MASTERFUL with a paintbrush. He was up there as far as skill & content and I don’t exaggerate when I say he was probably one of the best figurative painters in Northern California, or the whole state for that matter. He was on the cusp of making it big a few years ago, but health as it sometimes does, got in the way of things.

When I painted his portrait (below) a few years ago, everyone warned me that he was abrasive, intense, an intimidating man. I found him to be just the opposite in person. He was gracious, accommodating, and in less than ten minutes, he absolutely destroyed any confidence I had as a pool player. My final portrait of him captured his outer, rough exterior so well the portrait actually scarred someone. “Could you turn that around, it’s kind of creeping me out?” I believe was her quote. When I told this to Troy he let out a huge, booming laugh which he was famous for and said “imagine if you had painted me naked, she might have thrown up!”

You will be missed Mr. Dalton. 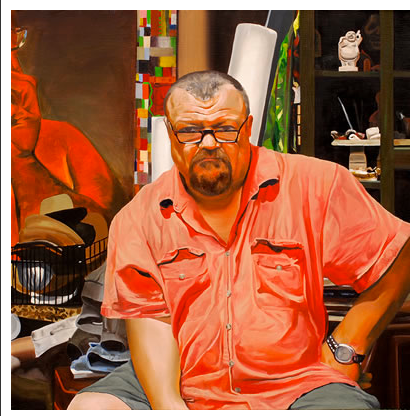 From the Sacramento Bee

By Robert D. Dávila
Troy W. Dalton, a prolific Yolo County artist and teacher who was a prominent figure painter, has died at age 57.

Mr. Dalton was best known for his large, narrative paintings of nude figures. His vibrant works often depicted biblical and mythological subjects, including Eve and Lilith, Adam's apocryphal first wife. He also painted unsparing self-portraits framed by vignettes of other subjects.
A prolific artist, he exhibited his works in many one-person and group shows. The Crocker Art Museum honored him with a special 2007 exhibition, and his paintings hang in public and private collections around the country.

"His work was very edgy and could be disturbing," said Victory Dalkey, The Bee's art correspondent. "He was wonderfully, wonderfully skillful and imaginative."
Mr. Dalton arrived in Sacramento in 1989 to earn a master of fine arts degree at UC Davis. He studied with noted artists Wayne Thiebaud, Gregory Kondos, Ray De Forest and David Hollowell. He went on to teach figure drawing and art at UC Davis; California State University, Chico; American River College, and San Francisco City College. 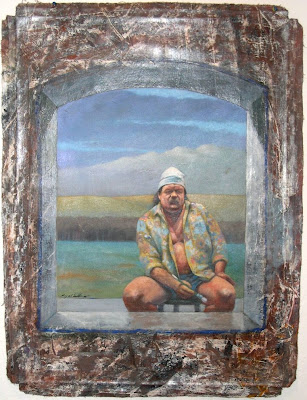 Besides painting, he was a sculptor, photographer, writer and poet. He lived for many years in Yolo, a rural hamlet north of Woodland, where he bought the former Town Hall and converted it into a spacious studio. He taught art at nearby Woodland Community High School.
Mr. Dalton was born in 1952 to a rodeo cowboy and a rodeo queen in Sweetwater, Texas. He moved to Montana to be reared by his grandparents on a cattle ranch near Billings.

He began creating art by carving woodcuts out of pine board and drawing caricatures of his teachers. He graduated from Eastern Montana College – now Montana State University, Billings – in 1979 and earned a master's degree in art at University of Wyoming in 1981.

He returned often to Montana and Wyoming to teach, lecture and exhibit his works, and he received a 2001 Outstanding Alumni Award at Montana State University. He also exhibited widely in Sacramento and served on the board of the Center for Contemporary Art in midtown.

Mr. Dalton had a daughter from a 20-year marriage that ended in divorce. A bear of a man with playful blue eyes and a booming laugh, he enjoyed spending time with his grandchildren and collecting secondhand art books. He also scoured trash bins for items with which to create art or furnish his studio.

"He was renowned for his Dumpster diving," friend Terry Hollowell said. "He would find and create the most amazing things."
Posted by Jeff Musser at 12:01 AM

Hi I wrote a blog about Troy too. He was a good friend of mine. I saw you at the social media in the urban hive. check out my blog
http://terrierockwellart.blogspot.com/2010/09/my-memories-of-troy-dalton.html

I'm a painter too
terrierockwellart.com perhaps we can link

I haven't seen Troy for years, since he was at Eastern Montana college. He was making huge paintings then, which he let his child participate in. Beautiful figurative paintings in the grand manner with a child's touch. Troy gave me my first Montana art show at the college gallery and invited me back to see his paintings in his studio, which he displayed while holding an olive jar full of olives in vodka - or maybe it was gin, I don't know. He was big in all ways and I am so saddened to hear of his death.
maryannfielder@comcast.net

A friend sent me this posting about Troy, Wonderful job Jeff.

I came to visit him three months before he passed. We were close His grandmother was my favorite aunt. From the time we met in high school, we were thick as thieves. You were generous with him as well. He could be an excellent ass. We had not talked with each other for a decade prior to my visit. Enough was enough and it was time to talk again. The enormity of what I walked into at Town Hall gave me pause, but I ended up staying almost a week. I am at Town Hall now for the second round of clean up and forging the critical path of what should be done next.

One of little diamonds discovered last week was a group of about 40 Planning Pads +or-. I believe he used them as a side bar/scratch pad to his work, or journal during his last years. He was 2 years younger than me; endured both kinds of arthritis, and did not paint his last 3 years.

I would describe them as a "bag of hammers", Greek Tragedy, with "pearls of wisdom" as the chorus of reason. They are possibly, his Swan Song.


FIRST AND LAST ENTRY TO ONE OF DALTONS PLANNING PADS
1
"The first Woman in Africa to contract Aids was stoned to death by her village when she told them of her illness.
..........
If you plant enough flowers around
where you live the beauty will camouflage
the poverty ."
[this might have been a quip of Grandma Elizabeth's who also said, "Only fools and new comers predict the weather in Montana".]
2
"In my version of the creation my god
accidentally sets paradise ablaze
when trying to smoke Leftists out of the
tree of Knowledge
[after 3 scratched through attempts to move on, he concludes with]
This is one of two studies for the expulsior painting."
[this is all Troy]

I have only scanned a few, with nothing to date them so far, and just like Troy, they just start and end with you questioning your question. In another life he would have made a great Rabi.