Twenty years ago, my friend Nathaniel was stopped and harassed by a police officer for walking down a particular street wearing a hoodie. When Nathaniel told me about the incident, I dismissed him. “You must have done SOMETHING…police don’t stop people for no reason.” I will never forget the look on his face when he said, “I can’t believe you just fucking said that to me! I didn’t do shit; I was just walking to Dave’s house. This shit happens weekly for me!” The pain and anger on his face was so intense, it frightened me. I had never seen him so enraged. Even when we got into the typical chest thumping teenage fights during high school, the anger I saw in him was only there to survive that particular moment. We knew teachers would intervene soon and whatever fury was needed to get through it, that fury would subside. But as he stood there shaking in his San Francisco 49’s hoodie, it wasn’t just pain I saw, it was what I now recognize as betrayal. All he wanted in that moment was for me to believe him, to listen to him, and perhaps acknowledge his pain.

Unfortunately, I didn’t know how. I was a white teenager unequipped to see the world from a perspective other than my own. This, in my opinion, is a major roadblock to real racial progress in this country. It’s The Default: The belief that the white experience is a neutral and objective experience and white consciousness is the standard consciousness unless otherwise specified. In order to see a person, you must see the truth of their pain. If you deny their pain, like I was denying Nathaniel’s, you refuse to see them. This is what makes black people invisible to most white Americans. And although we may be friends, neighbors, coworkers, or lovers, we live our lives never REALLY seeing each other.

“Whatever fuck it. You should try walking to Dave’s house sometime, let me drive your car for a few days” he said with a smile. “Yeah right,” I replied. We laughed and decided to see what our friend Dave was doing. Life went on, but our friendship was never the same. We never talked about the incident again, and I could feel a shift in our relationship, like he never fully trusted me after that. Had I known he would be dead just a few years later, I would have told him how sorry I was for not believing him. I would have told him how much I loved him. 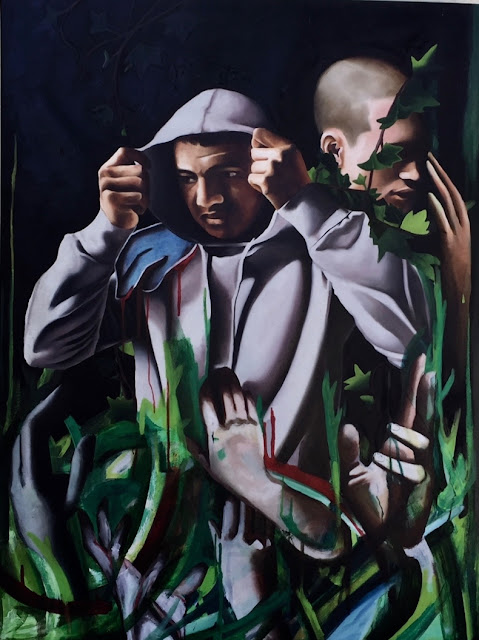 Posted by Jeff Musser at 4:12 PM No comments: