The Anti-Christ of Painting Has A Drinking Problem!

'Painter of Light' Kinkade In A Dark Spot! 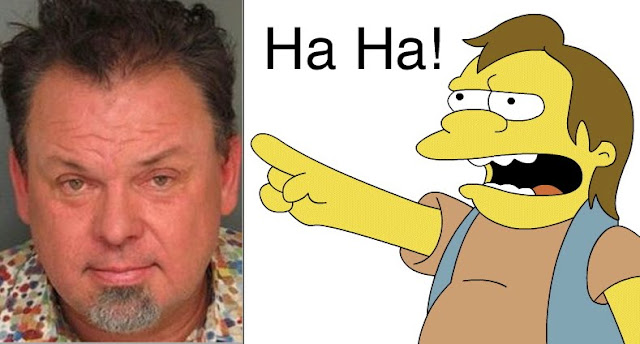 The painter of light is having a dark period.

Thomas Kinkade, the Placerville native who became one of the world's wealthiest artists with his sentimental landscapes and Christian motifs, has had a string of legal troubles.

Earlier this month the firm filed for bankruptcy protection from those gallery owners and hundreds of other creditors. And on Friday, the 52-year-old Kinkade, who calls himself "the painter of light," was arrested on a DUI charge outside Carmel, where he owns a home.

Kinkade could not be reached for comment Monday. But a company spokesman insisted all was well in the artist's empire.

"Tom is still painting and the business is still strong," said Dave Satterfield. He said Kinkade would not comment on the DUI arrest on the advice of his lawyer. Officials at Kinkade's corporate offices were still reviewing the allegations, Satterfield said.

"We will have more to say once we've completed that review," he said.

A CHP officer performed tests to determine if Kinkade was impaired and arrested him just after 10 p.m., Lehman said.

The arresting officer reported that Kinkade was "very polite," during the exchange, Lehman said. The painter was booked into the Monterey County jail on suspicion of misdemeanor drunken driving, Lehman said.

Kinkade submitted to a blood test, but the CHP is not releasing his blood-alcohol content, the officer said.

It was the second time this month that Kinkade had been embroiled in legal woes. On June 2, his company Pacific Metro, formerly known as Media Arts and the Thomas Kinkade Co., filed for bankruptcy protection in federal court.

The company, one of Kinkade's two major corporate arms, produces the paintings sold at galleries around the world, Satterfield said. Another corporation handles licensing, he said.

Satterfield said reorganization under bankruptcy laws was needed because outsourcing had left the company with a fraction of its former work force but still holding long-term leases.

"The company is in serious financial condition and is unable to continue without debt relief," the bankruptcy filing said.

A list of creditors more than 100 pages long was appended to the bankruptcy filing. It included a cardboard-box company in Sacramento, the state Board of Equalization and small art galleries in Folsom, Auburn and Elk Grove.

At the top of the list were Karen Hazelwood and Jeff Spinello, art gallery owners from Virginia to whom Kinkade's company said it owed almost $2.4 million.

The debt stemmed from a fraud claim the couple won in arbitration in 2006. The 9th U.S. Circuit Court of Appeals upheld the award last June. The couple and their lawyer could not be reached for comment Monday.

Second on the list were another set of art gallery owners who won a $1.4 million award in a similar case. That case is still being appealed, Satterfield said.

There had been a number of similar claims against the company which had failed, he said.
Posted by Jeff Musser at 9:00 PM 1 comment:

Thanks for sending this to me Jasmine. Yet another reason not to visit Arizona, people there hate art! Or rather I should say they hate art with brown skin folks in it. This article simply boggles my mind.


If I was one of the artists who painted the mural, and someone asked me to :

"You know, make the people a little more light-skinned, they appear to be too dark, some of our neighbors don’t want someone of Latino/Black origin featured so prominently”


My reply would be in the form of a Hallmark card from the Go Screw Yourself Section! 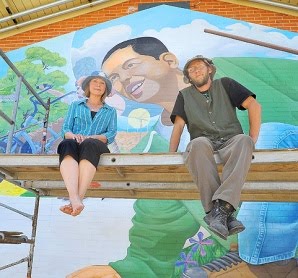 A group of artists has been asked to lighten the faces of children depicted in a giant public mural at a Prescott school.
The project's leader says he was ordered to lighten the skin tone after complaints about the children's ethnicity. But the school's principal says the request was only to fix shading and had nothing to do with political pressure.

The "Go on Green" mural, which covers two walls outside Miller Valley Elementary School, was designed to advertise a campaign for environmentally friendly transportation. It features portraits of four children, with a Hispanic boy as the dominant figure.

R.E. Wall, director of Prescott's Downtown Mural Project, said he and other artists were subjected to slurs from motorists as they worked on the painting at one of the town's most prominent intersections."We consistently, for two months, had people shouting racial slander from their cars," Wall said. "We had children painting with us, and here come these yells of (epithet for Blacks) and (epithet for Hispanics)."

Wall said school Principal Jeff Lane pressed him to make the children's faces appear happier and brighter. "It is being lightened because of the controversy," Wall said, adding that "they want it to look like the children are coming into light."
Lane said that he received only three complaints about the mural and that his request for a touch-up had nothing to do with political pressure. "We asked them to fix the shading on the children's faces," he said. "We were looking at it from an artistic view. Nothing at all to do with race."

City Councilman Steve Blair spearheaded a public campaign on his talk show at Prescott radio station KYCA-AM (1490) to remove the mural. In a broadcast last month, according to the Daily Courier in Prescott, Blair mistakenly complained that the most prominent child in the painting is African-American, saying: "To depict the biggest picture on the building as a Black person, I would have to ask the question: Why?"

Blair could not be reached for comment Thursday. In audio archives of his radio show, Blair discusses the mural. He insists the controversy isn't about racism but says the mural is intended to create racial controversy where none existed before.

"Personally, I think it's pathetic," he says. "You have changed the ambience of that building to excite some kind of diversity power struggle that doesn't exist in Prescott, Arizona. And I'm ashamed of that."

Faces in the mural were drawn from photographs of children enrolled at Miller Valley, a K-5 school with 380 students and the highest ethnic mix of any school in Prescott. Wall said thousands of town residents volunteered or donated to the project, the fourth in a series of community murals painted by a group of artists known as the "Mural Mice."

The public art, funded by a $5,000 state grant through the Prescott Alternative Transportation Center, was selected by school students and faculty.

"The parents and children love it," Lane said.
Posted by Jeff Musser at 8:41 PM No comments: