Notes On The New Work 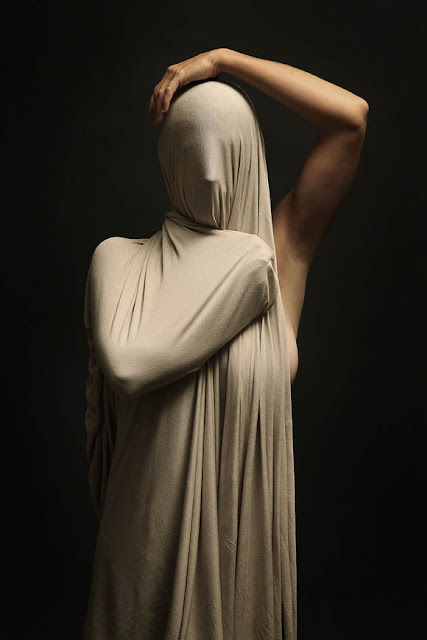 This post has been building for quite some time. I have shared my current project with a few people, made mention of it on my IG account, and applied for a few grants and fellowships using some of the ideas below.

But this will be my first public declaration. So take a deep breath and strap in.

This post is about many new directions I am going, but the main question I am confronting within myself, and what I will attempt to ask/challenge with my work is this: Why don’t white artists ever address whiteness in their work? When it comes to race or racism as a subject matter, why do white artists shy away from it?

I have hesitated to put these kinds of questions/problems out into the world because it’s a touchy subject for people. And by people I mean white people. And when I say white people, I obviously include myself. Want to see a room full of white people squirm with discomfort, bring up any of these subjects:
Some honorable mentions might include:


Some of you reading this might already be squirming a bit. Maybe you’re thinking, “Jesus Jeff, WHAT ARE YOU DOING? You’re a great painter, why would you go down this road?
You might be committing career suicide! What if it goes horribly wrong and you make Klan Paintings?”

I would say relax, I haven’t fully disclosed where I am going, and rest assured, I too felt the squirming inside when I decided to make this shift. I can feel it right now, as I type. There is this sense of dread; this thick, almost magnetically charged fog that starts to envelop me. My pulse is elevated. There is a cold, nervous sweat on the small of my back. It feels like some sort of weird defense mechanism is being activated.

My mind races with:
What if I do kill my career?
What if I do fuck up and make unintentionally racist work?
What if I alienate my friends and family?
Who am I to ask these sorts of questions?
Am I smart enough to pull this off?

First off, what career would I be killing?
I’m broke.
I haven’t sold anything major in quite some time. I have no gallery representation nor do I have any gallery prospects. No museums are courting me. A few collectors came over to the studio recently, and when I poured my fucking heart out to them about my work, they passed. Apparently it was due to “money issues.” But thanks to Facebook, I saw pictures of them in what looked like first class on the way to Europe. Having never flown first class, I wouldn’t exactly know what first class accommodations look like, but when there is a fucking bar in the middle of the plane, you’re not in coach.

My artists friends are passing me by with big public art commissions and gallery shows. Some days I wake up wondering if I have completely wasted my life. Sometimes when I walk to the coffee spot in the morning, I have this crippling fear that my parents are secretly ashamed of me. They say that they love me and they are “proud of me” but what could they be proud of when I haven’t really accomplished anything? Parents are proud of lawyers and doctors and occupations that pay well. What parents would be proud of a failed artist as a son?

Ok the last few sentences are a bit much. None of the “failed artist as a son” part is true, it’s just my brain going over board. I tend to make things far worse in my head than the situation really is. The past year was actually good as far exhibitions go, but there wasn’t enough momentum to make real change, so the part about not having much of a career is mostly true. When I think about still being in the category of “ emerging artist”, it makes me depressed given my age, but it’s also a bit liberating. No dealers are telling me to play it safe. No gallery is saying, “ I don’t know about this direction…collectors might not like this new work.” I can do whatever I want.

Second, my apprehension about making a mistake or alienating people or any fear about saying/doing the wrong thing, to be real, isn’t a good enough excuse to play it safe. Too often the discussion of race among white people is halted because someone “feels uncomfortable.” The prospect of saying the wrong thing and possibly being labeled a racist is a very real fear among white people because racism is frequently comprehended in a binary way: “ Either I’m a good, non-racist person or I’m a bad, racist person.” In past discussions, I have often felt the anxiety of that ugly label, and instead of pushing through the fear, I shut down, and I stayed silent when I should have made noise. Think of that weird defense mechanism I mentioned above. But this defense mechanism is in place to keep me comfortable, to keep the me and other white people from questioning authority or questioning our own racial bias. Aka, the status quo doesn't change. 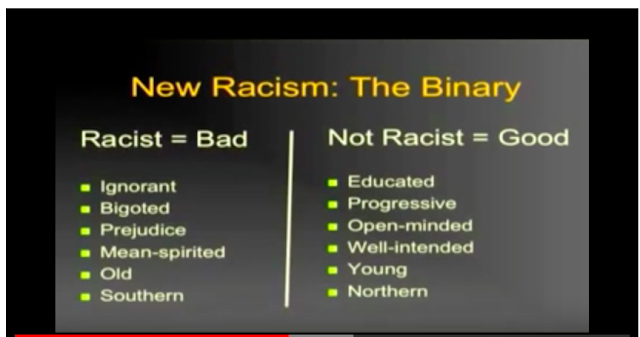 I tend to think, and most sociologists and historians who study the subject in depth would agree, that racists beliefs are more of a spectrum. The key, that part that I feel is hardest for white people to accept, is to know that if you grew up in America, you fit somewhere on the spectrum, and there is a highly probability you have internalized negative associations and beliefs with nonwhite people. In other worlds, no matter how liberal or koombyaya your upbringing was, you have some racism living inside you.

I cant speak to what other countries put in their proverbial water supply of ideas, but white supremacy is world wide and I got a taste of it when I lived in China. More on that in a future blog post. In order to escape the negative beliefs about non-white people, I think you would literally have to grow up on another planet. Even the label of “ white people” is problematic because the definition of who was allowed to be white in America has changed over time. More on that subject later.

If you’re a white person reading this and thinking, “ Hey man, you don’t know me or my situation! You don’t know whom I’ve loved or what my friends look like! I voted for Obama! Twice! I’m not racist!” I would say, “You’re right Buster, I don’t know you or your situation!” I am biologically an only child, but I have honorary family from the entire spectrum of humanity. When we hangout, we look like one of those United Colors Of Bennington Ads from the 90’s.

I love them all dearly, so I feel you on the diversity part. I also voted for Obama. Twice. But try this out. In your head, think of five negative stereotypes associated with say, black people. 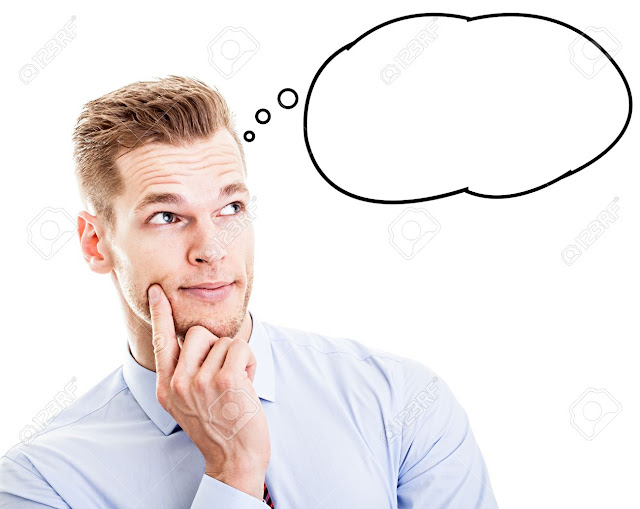 Now the question is, assuming you actually did this, if you are indeed “ a good, non racist person who voted for Obama twice,” where did those thoughts come from? Even if you don’t subscribe to any of these negative beliefs, as in “ This is NOT who I am,” the very fact that those negative thoughts  are in your consciousness means that a very clever system inserted them into your brain without you even knowing it.


Part of the reason I want to go down this path, is to find those pockets of racism inside me, confront them, extract them, and make work about the process. There are plans to make work about whiteness at a macro level, where the idea of “white people” came from, the ideas purpose, its history, how it evolved, and work at a micro level, how being white has effected my ideas of the world and how I function in it. And of course, I want to introduce some uncomfortable, yet constructive criticism into the mix. 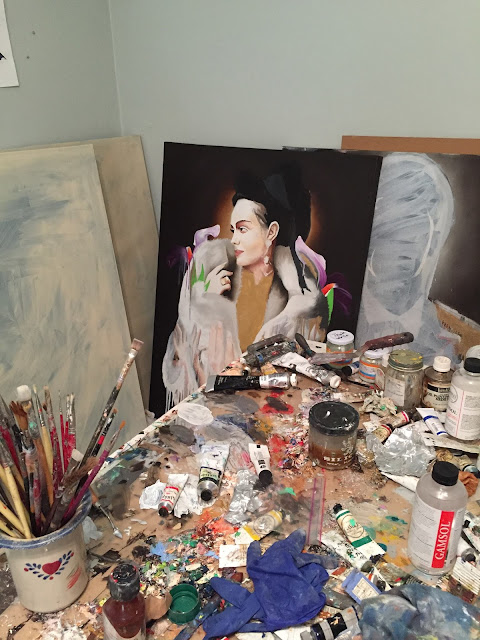 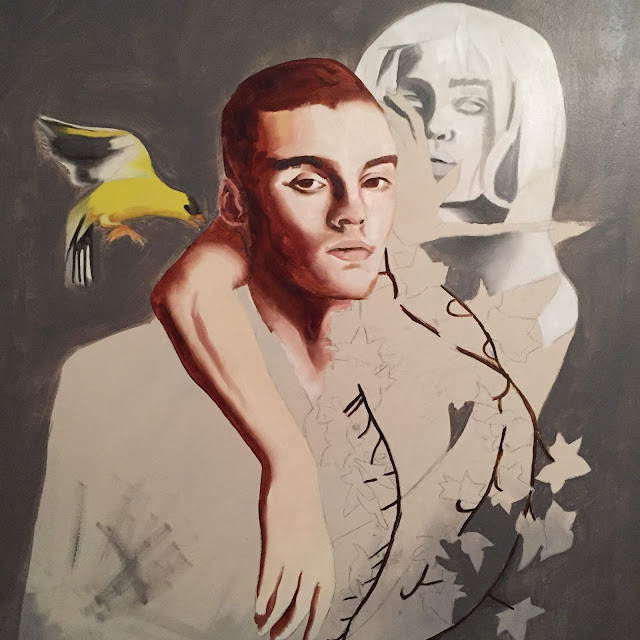 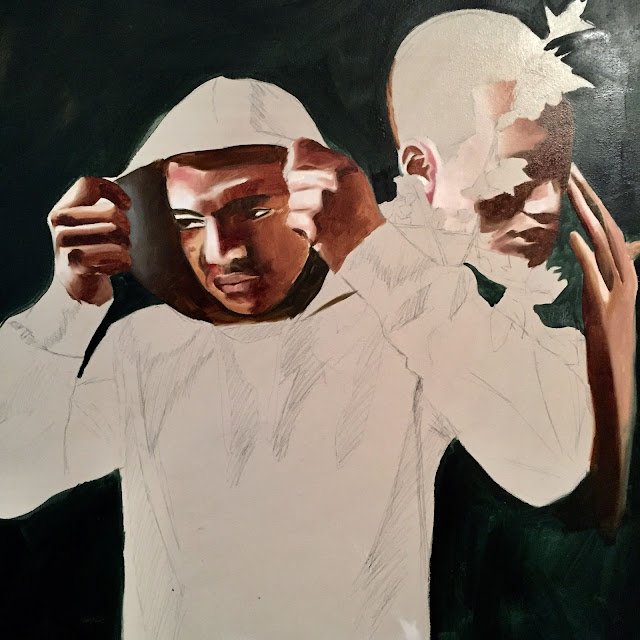 There is so much more that I have to write, but my thoughts and ideas are a bit scrambled at this moment. I will say that there will be a lot of upcoming blog posts about my new painting journey. I might even expand into sculpture so stay tuned!
Posted by Jeff Musser at 10:11 PM No comments: