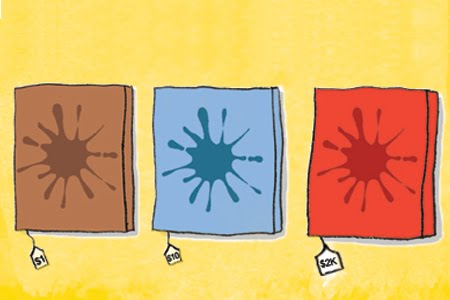 It's about motherfuckin time someone in art world had the guts to say what everyone already knows: The state of the art world is in decay and most of the work being made is bullshit!

Check out Paddy's website Art Fag City on the right in my links menu to read more art goodies from her. This article ties in well with a book that came out a few years ago called "The End of Art" by Donald Kuspit. Read it!

It will make you cry and give you hope at the same time. I had a conversation with my friend last night and he told me,

"As long as we create good quality work and we're honest about what we are trying to say and do, people will respond. Eventually the powers that be will take notice and if they don't, fuck em! We go our own way, and the people we make the work for will follow and just like in an election, the change comes in the power of numbers."

Below is the article from her post on Lmagazine.com
Enjoy!

Until taking this assignment, I had the luxury of avoiding the question everyone loves to ask and nobody wants to answer: What is the state of contemporary art? Or as I like to put it, "Is new art any good?" For the most part, the answer is no, and those inside the profession know it. Formulaic production plagues the field, work is masqueraded as more meaningful than it is, and the money invested in bad art is significant enough that undeserving artists receive accolades. It sucks.

If art is in decline—or at least at a very low point—are there signs to prove this point and is there anything to be done about it? Undoubtedly the largest and most consistent problem contributing to the impoverished state of contemporary art lies in the enormous imbalance between the rich and the poor. Most artists simply don't make enough money off their art to live comfortably, and contrary to popular myths linking suffering and great art, this isn't good for anyone. "I'm doing a lot of meditating so I can eat less," artist Graeme Gaerad told me last year. It didn't strike me as particularly healthy. Sure, strife forces change, but if a bus hits an uninsured artist, bankruptcy won't make their art any better. Last I heard, the artist I knew walking around with a broken foot because he couldn't afford to get it fixed wasn't working a hell of lot.

Of course there's plenty of "now-that-I've-got-a-lot-of-money-I'm-making-worse-work" examples in the art world—Ryan McGinley's staged, high-production 2008 photographs among the highest profile—but most artists make better work when they are able to devote their full attention to it. Ed Ruscha, Julie Mehretu, Jeremy Deller and countless others have more successful careers because they aren't maintaining five other jobs just to keep a studio space.
Artists with representation have a different set of problems than those without.

During the boom, for example, many artists I knew felt completely trapped. Collectors only wanted one version of their work, and as relative unknowns among a stable of blue-chip artists, they worried they'd negatively effect their career by switching directions. "I think schools were having trouble attracting people to apply for tenure track positions," a friend told me recently. "I was invited to apply twice by the same place before I finally submitted anything." Luckily for him, he took the position when it was offered.

The market soon fell, those jobs dried up, and he needed the work after the demand for his art softened. The situation also gave him the financial freedom to experiment, bettering his fortunes relative to many. Countless artists get boxed in to a particular kind of art-making by their own markets and never find a way out. This isn't the kind of environment that produces great art. Good gallerists support and encourage their artists through transition periods, but there aren't enough of them around.

Typically under-appreciated, dealers have such a difficult task that very few excel in all aspects of the job. Negotiating the needs of their artists, the collectors and the gallery isn't easy, and the divide in wealth between these three parties doesn't help. Many collectors don't buy because they think art has intrinsic value, but rather because they believe it's a good financial investment. The attributes of a piece "worth" spending money on don't necessarily correlate with artistic merit. "Brown paintings don't sell as well as blue or red paintings," Amy Cappellazzo, Christie's Specialist and Co-Director of the Post-War and Contemporary Art Department, told Sarah Thornton in her book Seven Days in the Art World. "A glum painting is not going to go as well as a painting that makes people feel happy."

Add to this art advisor Sergey Skaterschikov's sentiments about the relationship between publicity and investment-quality art, and it becomes clear why forging art markets for new artists and strong work is so challenging. "Going with the crowd is absolutely necessary when dealing with investment-quality art," writes Skaterchikov in his book Skate's Art Investment Handbook. "Investing in "no-name" artists who have no resources in place dedicated to 'taking them public' is not a return-focused investment strategy. Fortunes in art are made in the spotlight of publicity, not outside of it."
This sentiment alone goes a long way in explaining why artists in the public eye , like Damien Hirst, produce awful work that sells. Basically, for unknown artists to make any money, they need to be known, and to be "known," they need to be able to afford the time to make work, which requires money. You see the Catch-22?

But despite hardship, there are more artists making artwork than ever before. This is in large part due to the art market's expansion over the past twenty years—which will never fully recede—though digital technology also makes creating certain types of work much easier. This increase in artistic production has, at least in part, contributed to the rise of blockbuster group shows and art fairs. The New Museum's Skin Fruit, The Whitney Biennial, and PS1's Greater New York, each draw in large audiences, in theory separating the good from the crap. It's not exactly a fool-proof method. Too much weak work slips through the cracks in these shows, and given their unwieldy nature, it's hard for viewers to evaluate what they see.

Seeing as how these large biennial-esque events bring a lot of exposure to museums, it's hard to imagine a future with fewer of them. That's understandable, but it would be nice to see this city's contemporary art museums take a few more risks. Skin Fruit is only the most recent in a series of blue chip contemporary artist exhibitions. Culled from mega-collector and board member Dakis Joannou's collection, and curated by now-iconic 80s artist Jeff Koons, the exhibition is an ostentatious show of money from start to finish, an out-of-touch event that seems in bad taste during a recession—even if the Joannous of the world are what the art world is built upon.

In high times it's easier to believe that art will bridge the gap between rich and the poor. Today, such wealth simply reminds us how much we've got riding on what, at best, seems a gamble: that one day, what we do will be remembered by anyone at all.
Posted by Jeff Musser at 12:18 AM No comments: