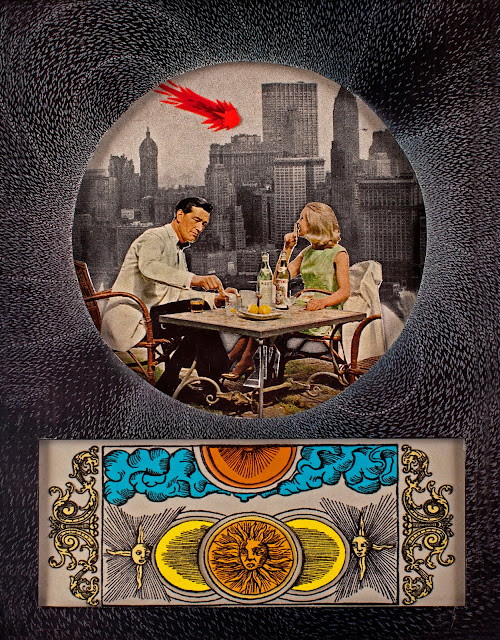 Like last months Unicorn, I met Kike this past July in New Orleans during Kolaj Fest. Often when I meet artists for the first time, there is this " too cool for school vibe." They watched footage of Warhol acting aloof and coy during interviews, and it seemed to work for Warhol, so they imitate it. But once they find out I'm also an artist, they instantly want to compare their exhibition history to mine own or blurt out EVERY project they are working on without taking a second to ask, "So how is your day going?" Kike was not one of these artists. Matter of fact, no one at Kolaj Fest had an attitude.

His first words to me, after I asked him what he was drinking, were, " I can't fucking believe I made it! I just got in from Peru, and I don't know where I'm sleeping tonight, but I'm so happy I'm here!" Even before I saw his work, that kind of enthusiasm let me know I had to find a spot for him here. 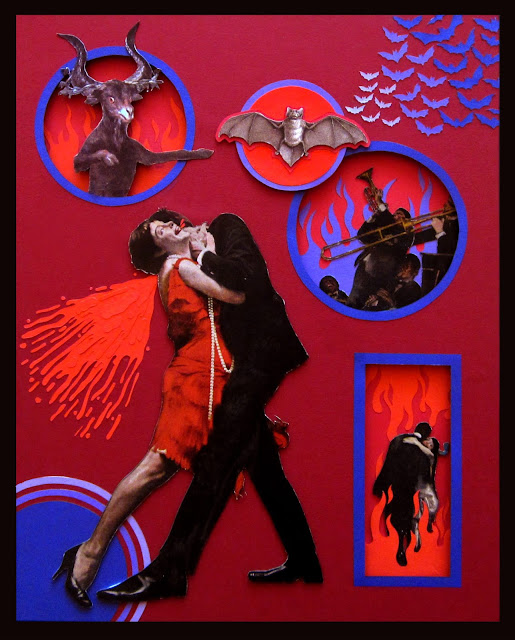 " My name is Kike (short for Enrique), I’m from Peru and I’m a self-taught artist. I come from a family of writers and always had and interest in telling stories. I started in collage as a hobby but slowly began taking over and now I’m a full-time collagist.

I wanted to combine the visual aspect of collage with my storytelling skills so I created a universe called Canson City, a fictional town where each collage is part of the mythology of the city, whereas is an illustrious citizen, an historical moment or customs and traditions each collage has its own short story that connects it to the city. I try to keep the stories short and funny, I write them as an improvisation exercise, just the first thing that comes to my mind after the piece is finished. "

True story: It's a rainy night in Canson City. A man walks into the city hall with a thermonuclear bomb in his jacket ready to detonate it and erase the city from the map. On the threshold of the building sees her, soaking wet. Then he decides to use the thermonuclear energy to dry her and walks her home. Quits terrorism, marries her, have children and no one dies. True story. 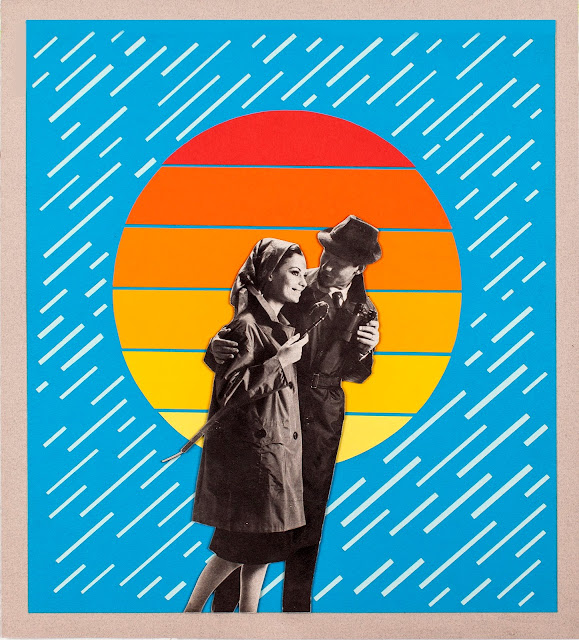 
Hidden in the watery depths of Canson City live the bubble fishboys, aquatic creatures that feed on bubbles produced by colorful deep-sea mollusks. The bubbles are collected and cooked in a variety of ways, among the most popular are bubble stew, bubbles in oyster sauce, crispy bubbles with roasted carrots, bubble casserole, bubble teriyaki, grilled bubbles with cucumber salad, bubble ceviche and bubble flan. 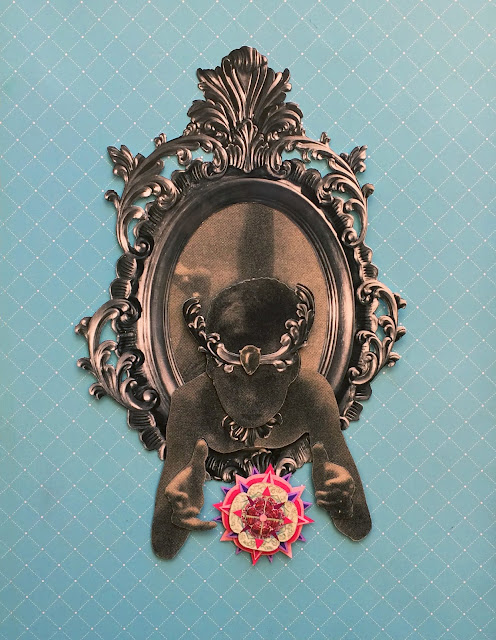 " I like to keep it colorful, I use cardstock paper as much as I use old magazines and I use knives more than scissors. " 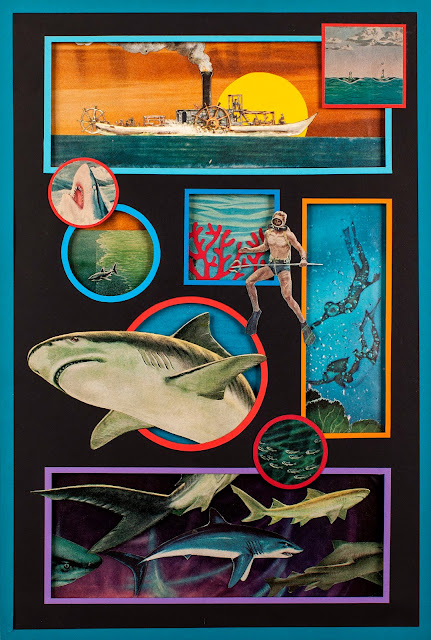 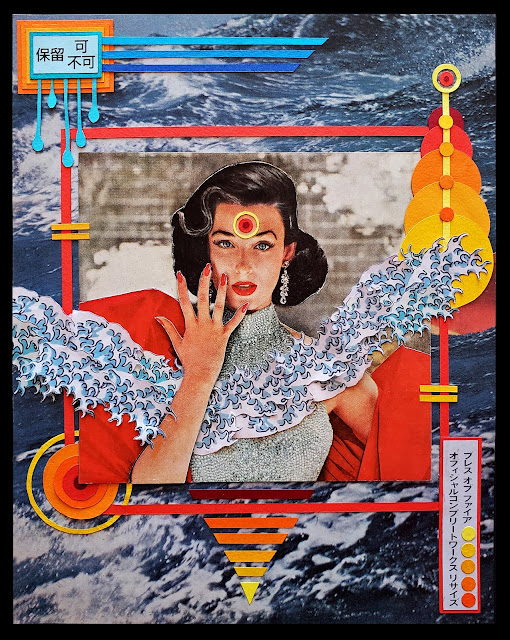 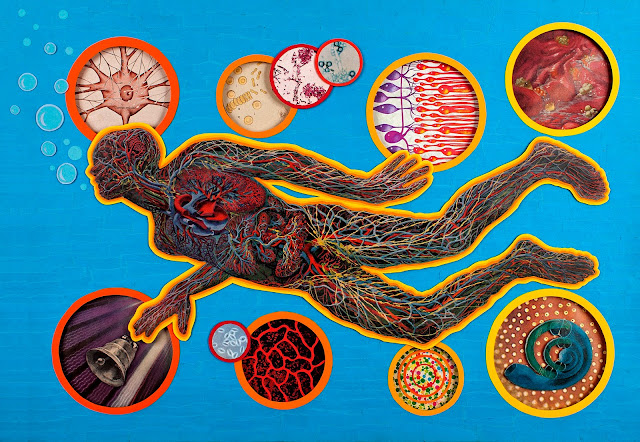 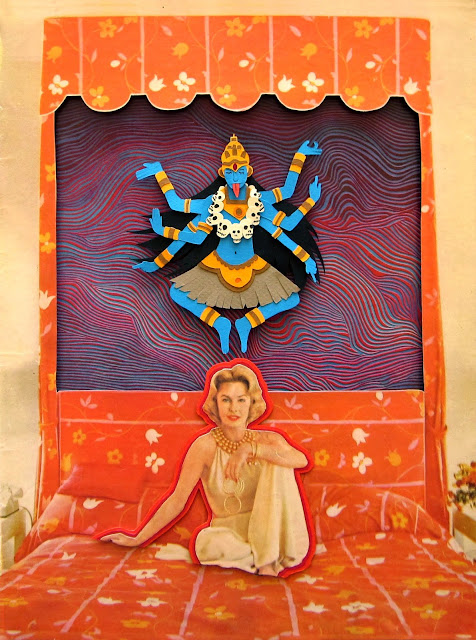 To see more of his work, visit his Facebook Page, his IG Page, and on Behance.
Posted by Jeff Musser at 12:00 AM No comments: