Yawn-Fest 2010 aka The Whitney Biennial

I have been back about a week now, going over my notes and memories from my trip to the Big Apple. Aside from needing to get out of Sacramento, like you ever really “need” a reason, I wanted to attend the opening reception of the show I was in, visit old friends, ride the subway (reminds me of Chicago), get waisted, and most of all, view the latest Biennial.

And for those of you that haven’t seen it, well the title of this post says it all. Or I can write simply, “Whitney Biennial aka zzzzzzzzzz” Or I can use what Hilton Kramer said in 1977 when he wrote, “The Whitney Biennial Is As Boring As Ever!” Or I can go right for the jugular and write, “2010 Whitney Biennial-Talent, Technique, and Your Message Is Meaningless-It’s The Same Mind Numbing Shit As Every Other Year and No Wonder Most People Don't Understand or CARE About Contemporary Art!!”
Yep.
I just wrote that.
And it felt goooood!
Go ahead and leave a hostile comment telling me how wrong or jealous I am. Dress up your argument with fancy “art speak” vocabulary. Or just write, “You’re an asshole!” Years ago in college, I had a teacher threaten to stick his hunting knife through one of my paintings because he hated the way I painted “ears.” So feel free to comment however you like, I can take it. 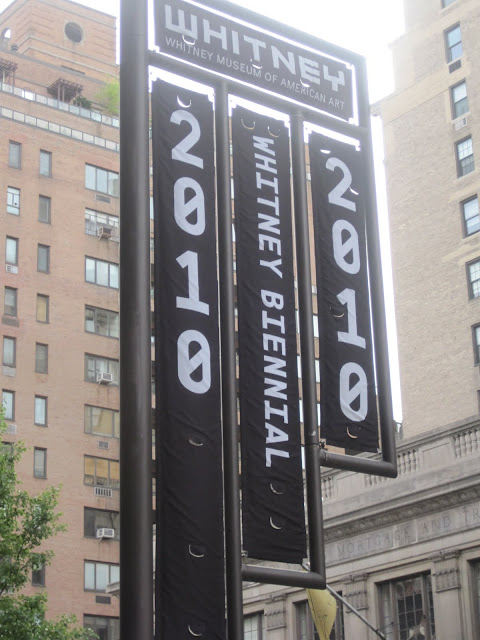 As seen from Manhattan and in the words of the two curators of the 75th Whitney Biennial, the most important roundup of this country's art: "During the last two years, the United States went through a huge atmospheric shift. After a period of political resistance came a kind of ecstasy. . . . With the election of Barack Obama, the clouds broke and the rain of renewal poured over the entire country." Strangely, that's not at all the vision I get from looking at the works in the show.
Before I go into the fire and brimstone portion of this post, there are some positive aspects I should point out.

Good:
Out of the 56 people featured this year, more than half are women, which is nice to see since women are still under represented when it comes to the art world. Some of the best works in this biennial, in fact, by female artists.

Pae White, an always-stylish artist from Los Angeles, has a photo of blowing cigarette smoke made into an astounding, computer-woven tapestry almost 40 feet long by 12 feet high. It's a heroic image of stasis and thumb twiddling, embodied in an archetypically luxurious commodity. It greets you as you enter the top floor of the biennial. It could almost be the whole show's flag. 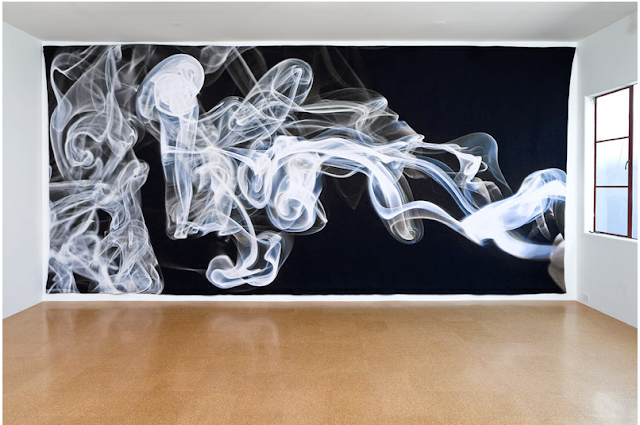 Kate Gilmore, who grew up in Washington, presents her latest video of aimless female struggle. We get to see Gilmore, dressed in a polka-dot frock, breaking her way into a tiny drywall space she's built, maybe 4 feet by 4 feet, and then breaking out again using her bare hands. It is a metaphor for learned helplessness and I was surprised at how much it stuck with me. 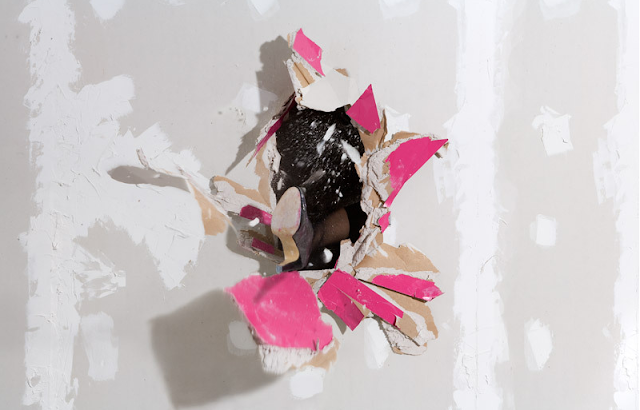 The curators -- the veteran Francesco Bonami paired with the much younger Gary Carrion-Murayari -- have included Nina Berman's famous photos of an Iraq war vet, Marine Sgt. Ty Ziegel, who lost one arm and his entire face to a suicide bomber, yet is forging on at home. These pictures are standard photojournalism, with their share of visual clichés. Yet their strong subject easily overrides their conventional aesthetics. 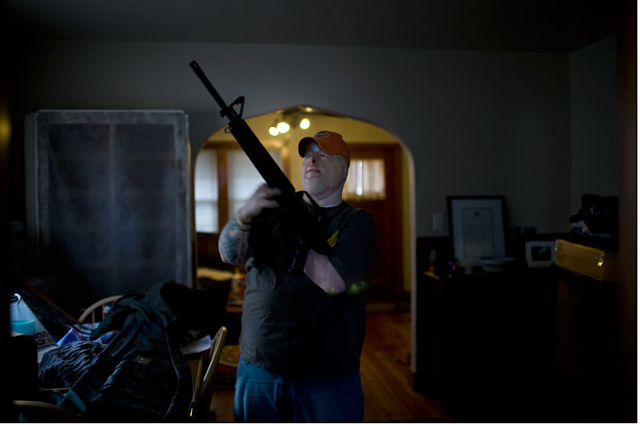 Another room contains the harrowing photojournalism of Stephanie Sinclair, who has documented the suffering and courage of abused Afghan girls whose lives were such a hell that they set themselves on fire. They failed to die and now have to be helped to live again. 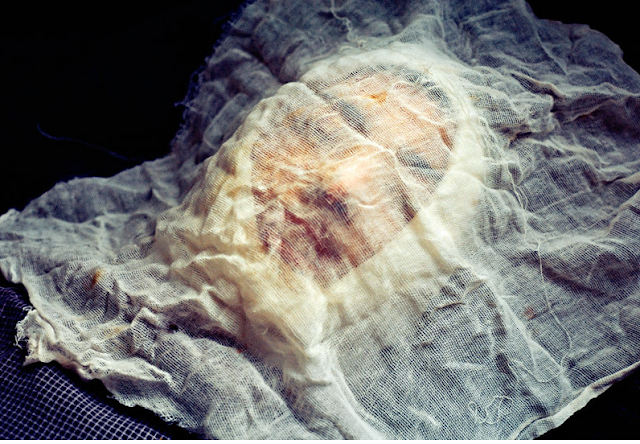 Aurel Schmidt’s intricately detailed drawings include objects and creatures such as flies, condoms, and cigarette butts that are pieced together to form larger figures. Master of the Universe: FlexMaster 3000 is a portrait of the Minotaur, the half-man, half-bull mythic creature who represents both creation and destruction. Through exquisite draftsmanship, Schmidt questions conventions of beauty and masculinity as well as standard associations with decomposition, rot, and refuse. She relates her interest in finding the beauty in ugliness to the idea of the human condition as a cyclical process of renewal and decay. By using the detritus of our lives as the building blocks for her subjects, Schmidt’s work becomes a sort of memento mori—a reminder of our own vulnerability and mortality. 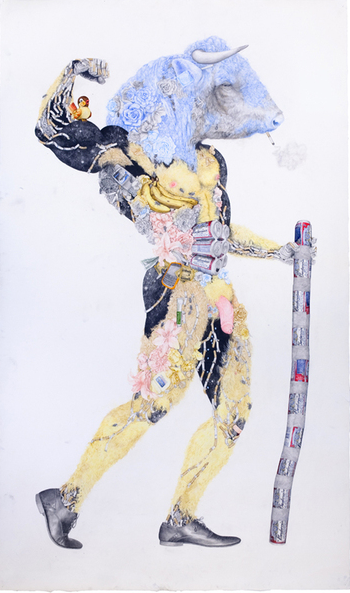 Jim Lutes integrates representation and abstraction through his use of images and lyrical marks in the same pictorial space. In some works, Lutes employs egg tempera—a classical medium not often used in contemporary art—which allows for a great level of fluidity, depth, and luminosity. And it’s good to see real painting hasn’t fully died out, especially compared to other works that claim to be paintings. 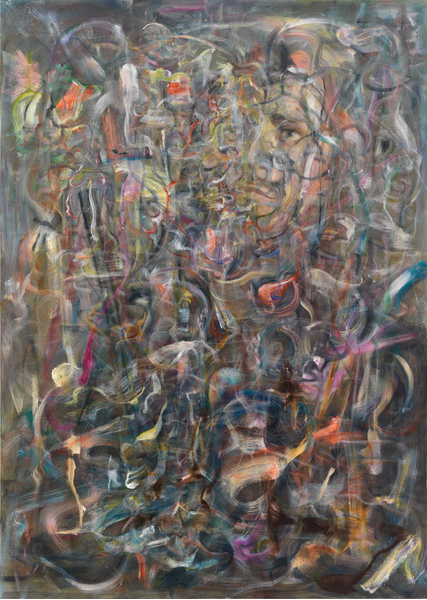 Good:
A Majority of the artists are under 40 years old and younger, with one lucky fucker (Tam Tran) who was born in 1986! On one hand the age thing gives me hope in regard to time and my progress as an artist; time is on my side as far as skill and career, like John Currin or Gerhard Richter. But on the other hand, I feel like a complete failure at this point in my life. Mid 30’s are just around the corner and I still don’t feel like I have really accomplished anything. Tam Tran was only a year old when Guns N Roses released Appetite For Destruction! At her first birthday party, I was in elementary school probably listening to GNR on tape cassette, playing kickball and getting in fights with black kids that were bused in from the ghetto! And now she’s in the Whitney while I’m drawing on my couch and crying myself to sleep. But enough about my typical Friday night.

Blah:
Aside from the those mentioned above, the art being shown by many of this year's Whitney artists is perfectly pleasant, but it barely seems to matter at all -- or even to want to matter or think it might ever be able to matter.

Going through this edition of the Whitney Biennial feels like an unusually good day window-shopping at the galleries of Chelsea: lots of surprisingly appealing commodities for sale -- to fill that supersize new house. It's a perfect New York show, that is, geared to New York's market-friendly culture, where so long as something looks good, and rich people buy it, it counts as good art. Honestly, I can't imagine them earning even a footnote in the history of 21st-century art.

But what about life outside New York? What about the other states in our bruised and battered Union? One can’t just have 95% New York based artists in a show of this magnitude and claim, “Here's what this moment in American Art looks like.”

The curators claim that all this mild-mannered fiddling reflects a newfound "need to rediscover the experimental nature of the artistic endeavor and politics within the self." That it is about "reaffirming the importance of the individual gesture in order to produce a collective change." But I don't see how such self-absorption, and such low ambition, could ever effect much of anything. If there's "change" on view in this show, I can barely make it out -- and it's certainly not the kind I can believe in.

A video by Ari Marcopoulos, projected huge with deluxe sound and color, is also about an aural assault. Marcopoulos lets us watch as two rock musicians use a roomful of guitar pedals to engender pure cacophony. It's not a bad image of social chaos and rage, and it ought to wake us up and get us going. The thing is, the two musicians are brothers maybe 10 and 12 years old, and their pedals are scattered on the floor of a colorful kid's room. Even raging noise has become a kind of empty, playful gesture, accessible to little kids and acceptable as creative expression to their minders. In other words, zzzzzzzzzzzzz.

Blah:
Another video by “artist” Aki Sasamoto further cements my belief that 99% of performance art is made by people who don’t have the talent or gusto to get into a decent theater program. According to the curators. “Aki Sasamoto’s installations and performances explore the nuances and peculiarities of everyday life. She uses sculpture, movement, video, and sound to transform mundane actions into theatrical events. Strange Attractors consists of a careful arrangement of sculpturally altered, found objects that take on new roles and provide guidance for Sasamoto’s improvisational performances that take place within the installation.” 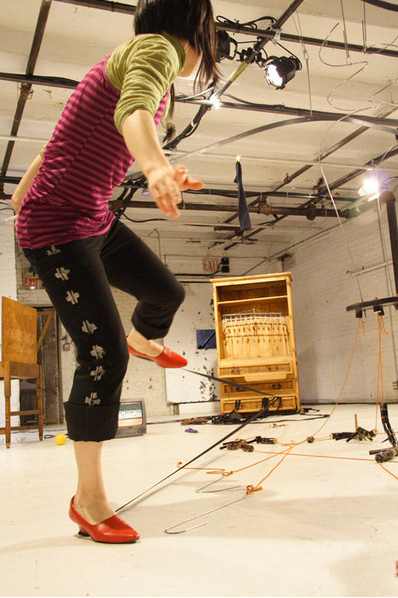 Does the world really need more Matthew Barney-esque work that claims to “explore the nuances and peculiarities of everyday life?” Can’t I just find the nuances myself, say for example, with a visit to the DMV? Can't I just accomplish the "peculiarities of everyday life" by standing in line for hours only to be told I have been standing in the wrong line, stand in another goddamn line so I can talk to someone who is angry and extremely overweight and takes their “fat aggression” out on me because they didn’t pay attention during career day at their high school? It's about the same as watching her video or most performance videos.

Conclusion:
We are a country that just spent something like a trillion dollars and more than 3,000 lives so that a foreign nation's sects can once again be free to bash each other. And I see a country that is still hemorrhaging blood and funds in the fond hope that another foreign nation, dysfunctional and misogynist can be kept from fully imploding.

Here at home, I see the richest nation in history being so obsessed with getting back to still more growth -- so that the rich among us can have a yet bigger house or plasma screen -- that it won't spend money to rescue a neighbor's health, a crumbling bridge or our children's planet. Most important -- if not in the details of this biennial, then in the overriding spirit of so much of its art -- I also see a country that recognizes that all this is some kind of a problem but feels as though it's powerless to do anything about it -- except take solace in that bigger home or screen. I'm not claiming that all art today is in an absolutely hopeless state. There is enough engaged, ambitious art out there to fill a biennial. Some of it got into this show; but most of it did not.

Overall, the 2010 Whitney Biennial shows just how many of this country's artists (myself included) are at times unsure what to do with themselves. Hopefully within the next two years, the next round of curators will do a better job digging through all the postmodern clutter that has swamped the American Artistic landscape. If they don’t, and it continues to be business as usual, then America as a whole will truly be in decline.
Posted by Jeff Musser at 12:44 AM 6 comments: