In case you are not a Sacramento Bee subscriber, below is the article from Sunday's Scene Section about yours truly. Special thanks to Bob Sylva who wrote it, Kevin German who took the picture and listened to me ramble for a few hours and Elliot Fouts for sending out the press release. Enjoy the Article! 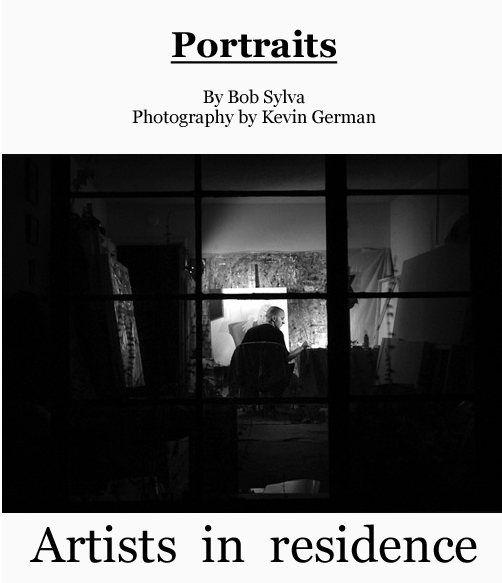 
On a cool, overcast morning, Jeff Musser is mowing the carpet in his midtown apartment with a dandy Eureka upright.

The apartment reeks of paint, and one has to tiptoe through a party of celebrated faces. The apartment doubles as Musser's studio. There is a canvas tarp on a portion of the floor. Another paint-dabbed tarp covers the front wall. On the easel, there is a half-finished portrait of sculptor Camille VandenBerge, looking much like an emerging blond goddess. Wayne Thiebaud, whose portrait is finished, sits on the floor, looking on approvingly.

Jeff Musser has an appealing, perhaps even insightful, show opening Saturday (8/11/07) at the Elliott Fouts Gallery. It is called "Local Legends: Portraits of Artists." There are 20 canvases in all, most of which are of well-known artists in the area. "I wanted to show that there's more to the city than just the Sacramento Kings," he says.
Jeff Musser is 30 years old. He is, to date, an unknown artist. Wearing paint-splattered boots, pants, a T-shirt, he is slim, pale, with thin arms, a nubby scalp, a coarse, reddish beard. He is soft-spoken, articulate. He has watchful, blue-gray eyes and his gaze is almost drowsy, at times, lulling.
He is not by nature aggressive. Or obnoxious. Thus, the prospect of cold-calling artists he admires and asking them if he could paint their portrait, well, it filled him with terrifying dread. "Sometimes I would call and hang up the phone before they answered," he says.

Only two artists refused him -- Fred Dalkey and Wayne Thiebaud. But he painted them anyway.

The surprise here is just how accommodating most of the artists were, how encouraging, how generous of their time. Musser, who worked from photographs, spent an entire year on the project. In effect, he had 20 artists as non-paying roommates (no surprise there) in his tiny apartment. And he did all the cleaning.
Now, in advance of the show, most of the completed portraits are stacked in his bedroom. The faces are revealing. There's Roy Tellefson, who died in 1996, sitting in a lawn chair at Dillon Beach. There's Boyd Gavin, posed in Musser's kitchen, looking pleased if not smug. "He didn't even want to see my work first," says Musser. "He just came over."

More incredible was the reception he got from Helen and Alan Post. They invited him to their house. "He called my slides exquisite," Musser says of Alan Post. "I was floating on the ground when I left there!" He drank beer with Mark Bowles; talked for hours with Peter VandenBerge; was given an eye-popping tour of Mel Ramos' studio in Oakland. Greg Kondos actually gave him an original pencil sketch.

There was only one mishap. Troy Dalton is a bear of a fellow with a ravishing gaze. One night, Musser had a girlfriend visiting. The now ex- girlfriend took one look at Dalton's frank portrait and cried -- "Can you turn that around? He's creeping me out!"

Jeff Musser grew up in River Park. His father was a vacuum cleaner and sewing machine repairman; his mother worked for Social Security. "I was relatively quiet, a loner," says Musser. "I could entertain myself with art. I did normal things, too. I had friends. I played baseball. But I was always drawing."
He went to Sacramento High School. And American River College. Then his supportive parents took out a loan on their house and sent him to the School of the Art Institute of Chicago. Upon graduation, he worked for a big ad agency in Chicago whose single client was McDonald's. For two years, in a deadening of his spirit, Musser designed Happy Meals.

He came back home in 2003. Has held a string of lousy jobs. But his painting career is looking up. One piece was in the 2005 Crocker-Kingsley; a portrait of his grandmother was accepted in this year's State Fair. The show at Elliott Fouts is a turning point.
"I've learned what I'm capable of and what I'm not capable of," says Musser. "I shouldn't be too hard on myself. I've only been painting for a few years. Everyone told me, 'Find your voice. Be true to it. Be tenacious. It doesn't happen overnight.'
Posted by Jeff Musser at 9:10 PM 1 comment: