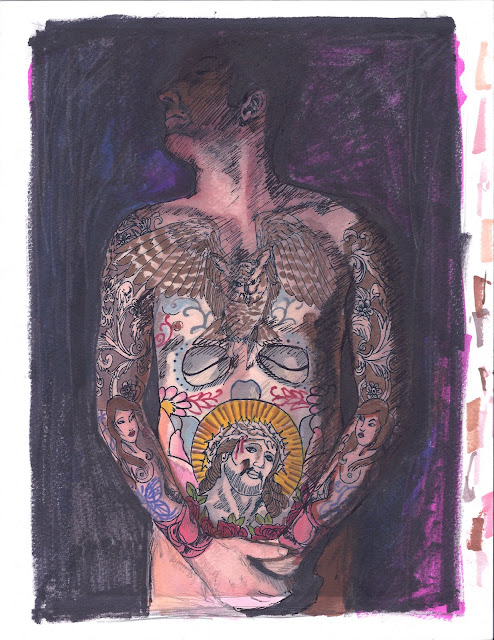 I made a goal last year at the Armory Show, that roughly one year from that date, I would have work exhibited in NYC. And now that day has come! It's not the Gagosian or the soon to be dissolved Dietch Projects or Pace Wildenstein, but it's a start.

It's a small pen & ink drawing mounted on canvas as part of self portrait show from which a book will be published!
Hooray for me! If any of you in NYC can attend or you will be in town, please attend!

In Your Face Michelangelo 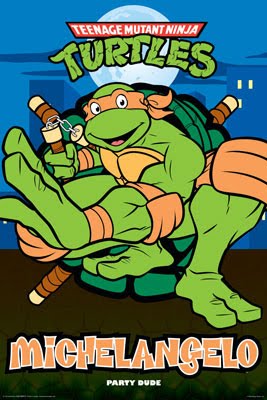 No, not that one! I'm talking about the original.
I have been saying for years that Carvaggio is more relevant now than ever, especially compared to other people who claim to be "painters."

Now the New York Times agrees with me! Or at least art historian Philip Sohm at the University of Toronto does. If you have ever had the chance to view a Carvaggio in person, it might bring you to tears, or at least creep you out. Either way, he is called a master for a reason. Thanks for sending this my way Doug Biggert! 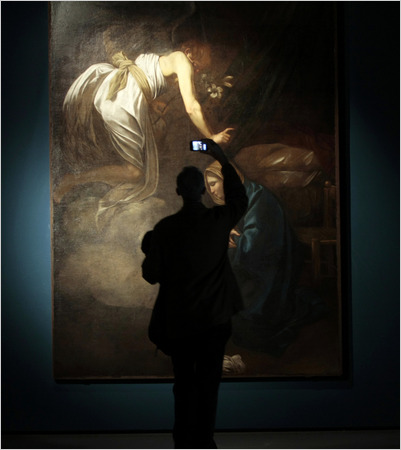 ROME — By at least one amusing new metric, Michelangelo’s unofficial 500-year run at the top of the Italian art charts has ended. Caravaggio, who somehow found time to paint when he wasn’t brawling, scandalizing pooh-bahs, chasing women (and men), murdering a tennis opponent with a dagger to the groin, fleeing police assassins or getting his face mutilated by one of his many enemies, has bumped him from his perch. That’s according to an art historian at the University of Toronto, Philip Sohm. He has studied the number of writings (books, catalogs and scholarly papers) on both of them during the last 50 years. Mr. Sohm has found that Caravaggio has gradually, if unevenly, overtaken Michelangelo.

He has charts to prove it.

The change, most obvious since the mid-1980s, doesn’t exactly mean Michelangelo has dropped down the memory hole. To judge from the throngs still jamming the Sistine Chapel and lining up outside the Accademia in Florence to check out “David,” his popularity hasn’t dwindled much.

But, charts or no charts, Mr. Sohm has touched on something. Caravaggiomania, as he calls it, implies not just that art history doctoral students may finally be struggling to think up anything fresh to say about Michelangelo. It suggests that the whole classical tradition in which Michelangelo was steeped is becoming ever more foreign and therefore seemingly less germane, even to many educated people.

His otherworldly muscle men, casting the damned into hell or straining to emerge from thick blocks of veined marble, aspired to an abstract and bygone ideal of the sublime, grounded in Renaissance rhetoric, which, for postwar generations, now belongs with the poetry of Alexander Pope or plays by Corneille as admirable but culturally remote splendors.

Caravaggio, on the other hand, exemplifies the modern antihero, a hyperrealist whose art is instantly accessible. His doe-eyed, tousle-haired boys with puffy lips and bubble buttocks look as if they’ve just tumbled out of bed, not descended from heaven. Coarse not godly, locked into dark, ambiguous spaces by a strict geometry then picked out of deep shadow by an oracular light, his models come straight off the street. Cupid is clearly a hired urchin on whom Caravaggio strapped a pair of fake wings. The angel in his “Annunciation” dangles like Chaplin’s tramp on the high wire in “The Circus,” from what must have been a rope contraption Caravaggio devised. 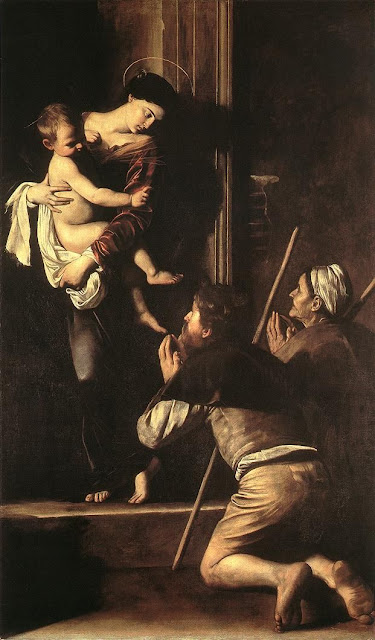 Rome’s art establishment at the turn of the 17th century, immersed in the mandarin froufrou of Late Mannerism, despised Caravaggio for the filthy, barefoot pilgrims he painted at Mary’s doorstep. Out to “destroy painting,” as Nicolas Poussin, the most high-minded of all French artists, saw it, Caravaggio connected with ordinary people, the ones who themselves arrived barefoot and filthy as pilgrims in Rome. And fortunately for Caravaggio, he also appealed to a string of rich and powerful patrons.

But almost immediately after he died from a fever at 38, in 1610, on the beach at Porto Ercole, north of Rome, his art was written off by critics as a passing fad and neglected for hundreds of years, setting the stage for his modern resurrection. Connoisseurs like Bernard Berenson were still dismissing his work a century ago when Lionello Venturi, Roger Fry and Roberto Longhi, among others, finally revived his reputation as a protomodernist.

Mr. Sohm, who announced his findings during a talk at the College Art Association conference in Chicago last month, focused on publications, not tourist revenues or exhibition attendance figures, and his study says nothing about how Michelangelo and Caravaggio stack up against box-office greats like Rembrandt and van Gogh.
But his research does corroborate evidence plain to anybody in or out of art academe or who has browsed for scarves in Italian airports where motifs of Caravaggio’s “Bacchus” and head of Goliath have become as ubiquitous as coasters bearing bits of David’s anatomy and mugs with the figure of Adam from the Sistine ceiling. Caravaggios are now used to decorate the cover of “Emerging Infectious Diseases,” a medical journal, and to advertise a sex shop in London. “The only way to understand old art is to make it participate in our own artistic life” is how Venturi phrased it in 1925. That Caravaggio left behind no drawings, no letters, no will or estate record, only police and court records, makes him a perfect Rorschach for our obsessions.

He was outed in the 1970s by gender studies scholars, notwithstanding the absence of documents to indicate he was gay. Pop novelists and moviemakers have naturally had a field day with his life. Exhibition organizers cook up any excuse (“Caravaggio-Bacon,” “Caravaggio-Rembrandt”) to capitalize on his bankability. Newly discovered “Caravaggios” test the market every year. (Like this one below) 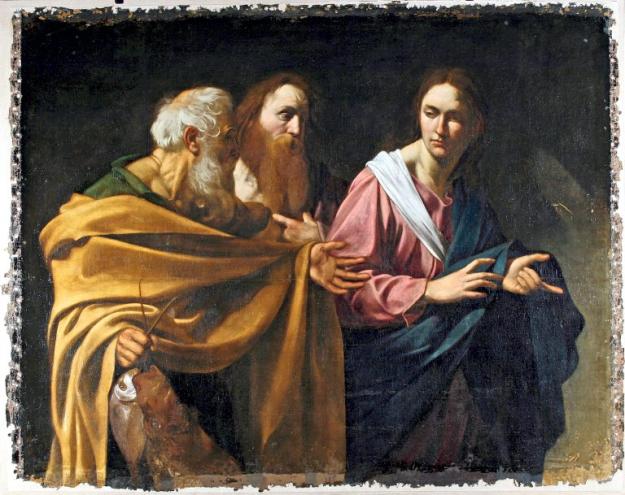 Not long ago, two Caravaggios turned up in the French village of Loches in the Loire Valley, under the organ loft of a local church. Never mind that various Caravaggio experts have since doubted the pictures are by him: Loches is advertising itself as a Caravaggio town. And officials in Porto Ercole lately said his lost remains had been found in an underground ossuary, pending DNA tests with descendants of his brother, who still live near Milan. The iconoclast is even being turned into a religious icon, it seems: Caravaggio’s “bones” may soon become holy relics for art pilgrims.

Another Caravaggio retrospective has also opened, here at the Quirinale: two dozen paintings, on view through June 13, a blue-chip survey, installed ridiculously in darkened rooms with spotlights, as if his art needed more melodrama. But the pictures are glorious anyway. The exhibition is mobbed.

It happens that a show of Michelangelo’s drawings is at the Courtauld Gallery in London, through May 16. Gifts for a beautiful young Roman nobleman, Tommaso de’ Cavalieri, on whom Michelangelo had developed a crush, the drawings were ostensibly supposed to help Cavalieri learn to draw. Imagine Roger Federer handing you a DVD of himself at Wimbledon, saying “Just do this.” These are drawings of the most arcane refinement, unearthly beautiful.

By contrast, Caravaggio, wrestling art back to the ground, distilled scenes into a theatrical instant at which time seems suddenly stopped. That’s why his pictures can bring to mind movie stills. The art historian Michael Fried, who has just written a book about Caravaggio, notes the quality of the figures’ absorption. Life-size images, they share our space and we theirs, face to face, as another art historian, Catherine Puglisi, has pointed out (something that doesn’t happen with Michelangelo’s enormous sculptures or his frescoed ceiling that we only see from far away). The immediacy somehow dovetails with the tabloid tawdriness of his biography, with the whole modern celebrity drama.

The other afternoon endless scrums of tourists here jostled before the Caravaggios in the Church of San Luigi dei Francesi and the Basilica of Santa Maria del Popolo, feeding pocket change into the boxed light meters. It was probably just coincidental, but in the Church of Santa Maria sopra Minerva, nobody stopped to look at the Michelangelo.
Posted by Jeff Musser at 11:01 PM No comments: