Last Of The Mohicans (Shenzhen Residency)

Last Of The Mohicans

Early in the month, the director of the project asked to stop by the studio to inform me of some “important news.” He arrived with two large Tsintaos beers, and told me I might want to sit down for a bit.

“Well, I learned yesterday that I’m out of a job. So is the rest of art related staff here at Da Wang. The residency is closing down soon and you will be the last artist in the program.”

He then explained that there has been a “change in management” here at Da Wang. The owner of the property has stepped down from the day to day operations and his son has taken control of the program. Unfortunately the owner’s son is not an art person. He’s a Dollars and Cents kind of guy, or in this case Yuans and Wu Maos. He wants to maximize the profit potential of all the facilities here, and since the A.I.R. program doesn’t bring in a steady stream of income, it has to go. From what I understood, and Tom is only partially clear about it because in China people are often REALLY VAGUE with information that should be straightforward, the studios, the exhibition hall, ceramic facilities, and apartments are going to be rented out on a month to month basis.


Or the facilities might be scrapped all together and converted into who knows what. After Chinese New Year, that’s it, no more A.I.R. program at Da Wang Cultural Highland. :(

Some of the ceramics going into storage: 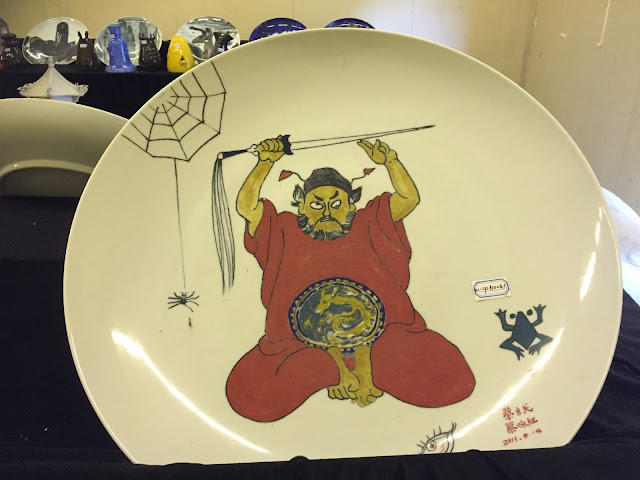 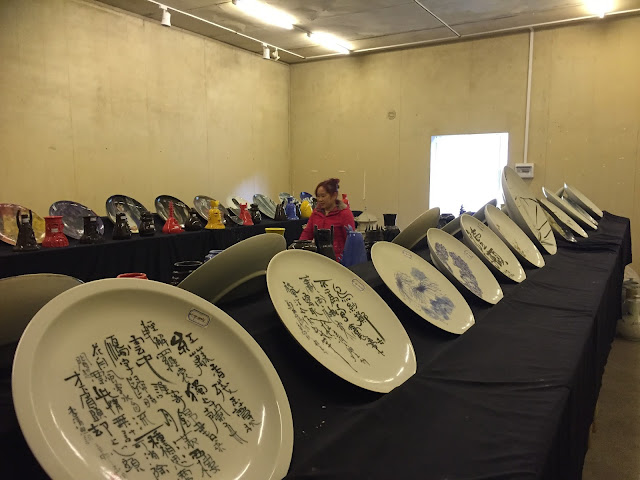 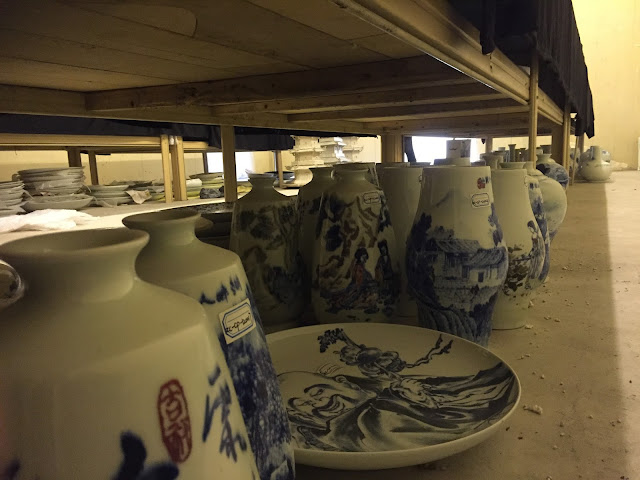 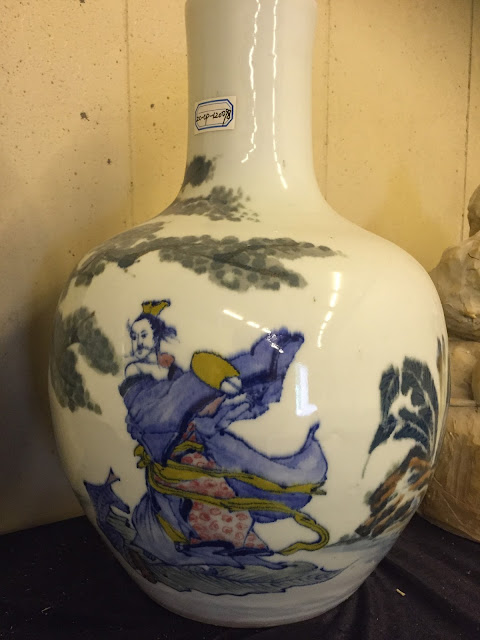 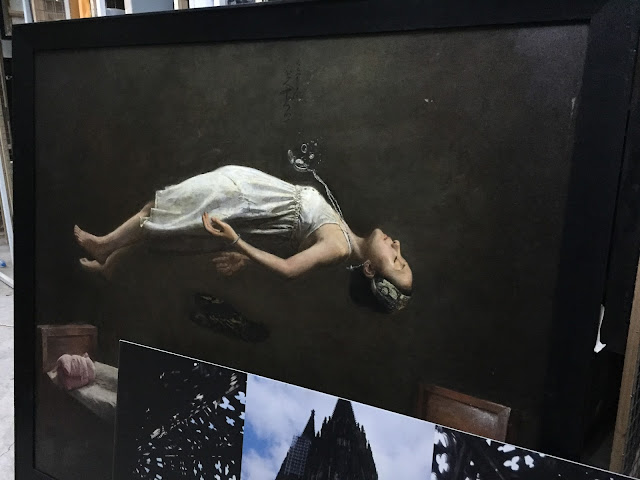 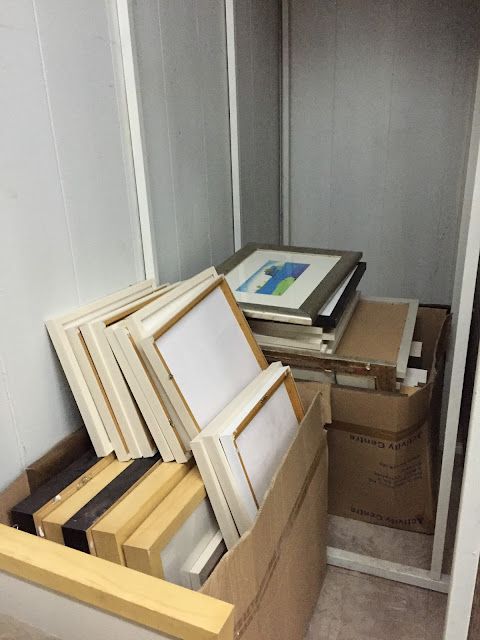 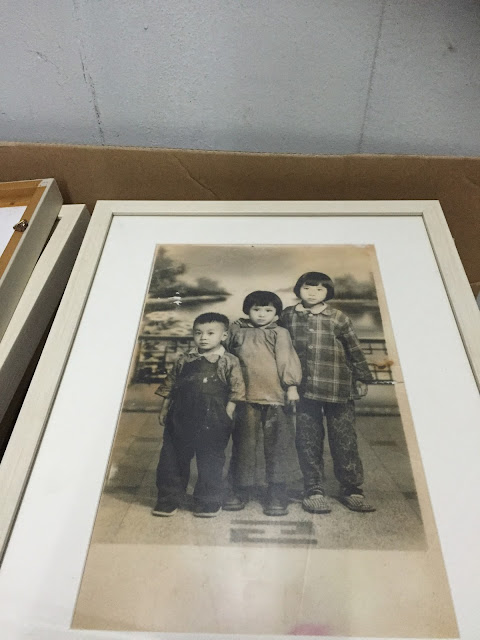 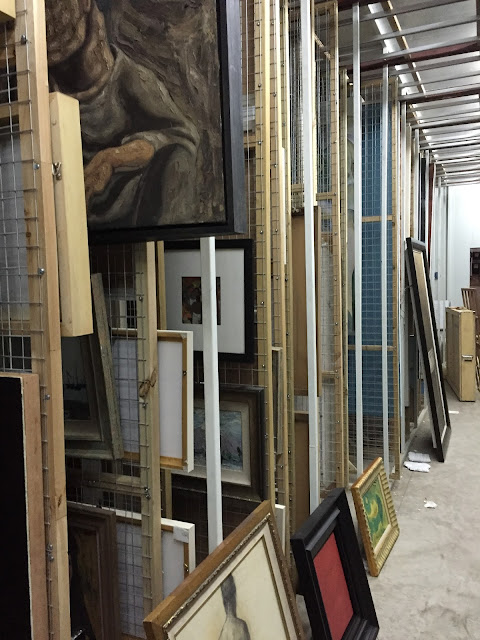 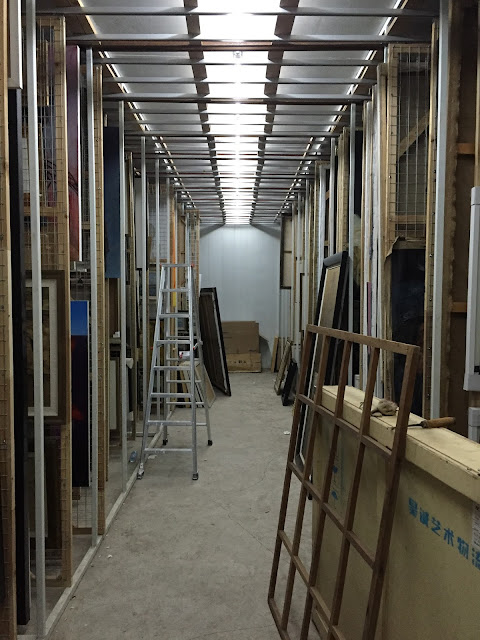 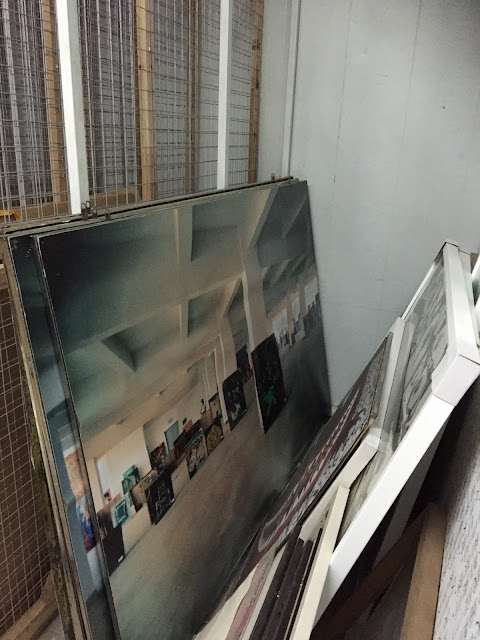 So where does that leave me?

What about my studio and all the paintings I’ve been busting my ass on? That answer is a bit of good news, bad news. Good news is, since I signed the contract and paid to stay until the end of March, that’s what I’m going to do. Tom doesn’t think it should be an issue, and so far it hasn’t been. And unless Chinese Scrooge McDuck wants to refund a large portion of the money I’ve paid, my paintings and me are staying put until end of March!

Bad news is, no solo show for me.

I have painted between 30-50 hours a week since mid November with the understanding that, in mid March, I would display the work I’ve made. But since the program is over after Chines New Year, the solo show won’t happen. Which stings of course, but as long as I don’t have to move before I’m ready, I can manage. I just have to find another place to exhibit my work sometime in the Spring or Summer. The phrase, “When one door closes, another one opens,” comes to mind. Now, I’m looking for that “Door of opportunity ” to open here in Shenzhen, Guangzhou, Hong Kong, Shanghai or America, but honestly I don’t know how the hell I’m going to pull it off.

I have put so much energy into this work and I still have ideas that I want to get out, but at this moment the thought of shopping it around overwhelms me. Soon I have to switch my brain to “Sales & Promotion” mode and in a way, do a little song and dance to get the attention of collectors and gallery people.

But unless you have an art dealer, or you’re a legacy, or you’re having sex with influential people in the art world, or you pull a Basquiat and get discovered, you have to do a song and dance to promote yourself. It is my least favorite part of the art game. When I think of the uphill battle of promotion and networking, sending out mass emails, posting work within the social media sphere, competing with younger recently minted better connected MFA graduates, and the countless rejections that will come, I just want to stop. I want to walk away from my studio practice and be normal with a 9 to 5. I just want to give up on my dream and live a mind numbing existence.

But then the dust settles inside my head, and I think about all the other times I wanted to give up. I remember moments when I my life was really off balance. I think about the year 2010 and my abrupt departure from Verge. It was a time when I not only wanted to give up on art, I wanted to give up everything. Christmas of 2010 was the closest I’d ever come to considering suicide. There were moments in high school that were turbulent, but nothing like 2010. That year I had destroyed my life is such a way that for a brief period of time, I actually thought about ending it. Some know the details. Perhaps I will get into specifics one day, but for now, I will keep it to myself.

But when you have severe depression like I do, your brain doesn’t always fire on all cylinders. Logic often looses the battle to destructive, deleterious emotions. And that was one of the hidden blessing of 2010, I learned how manage my depression by pouring some it into my paintings.

Speaking of which, here are some new works in progress on canvas and paper : 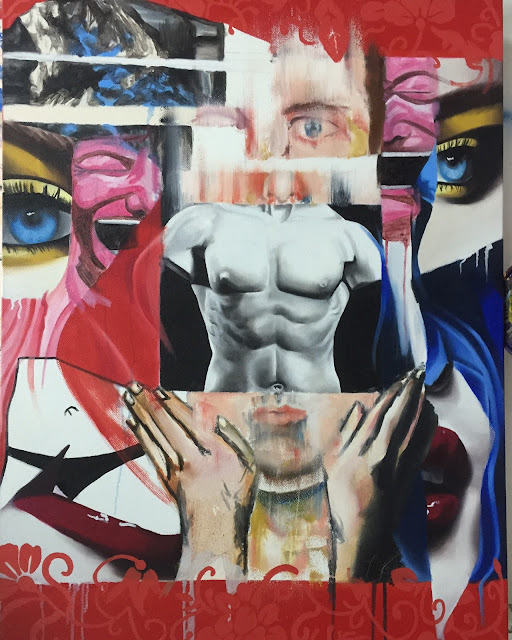 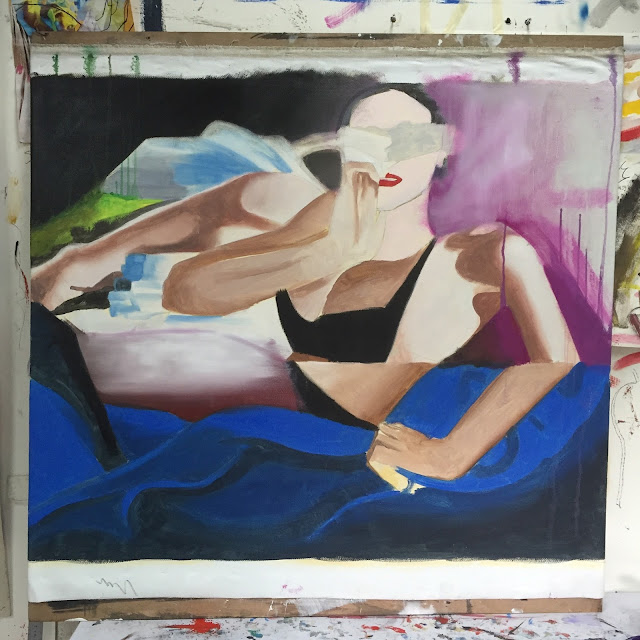 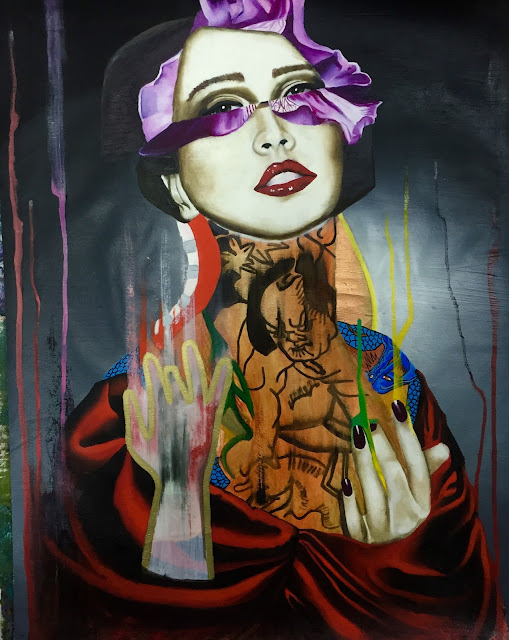 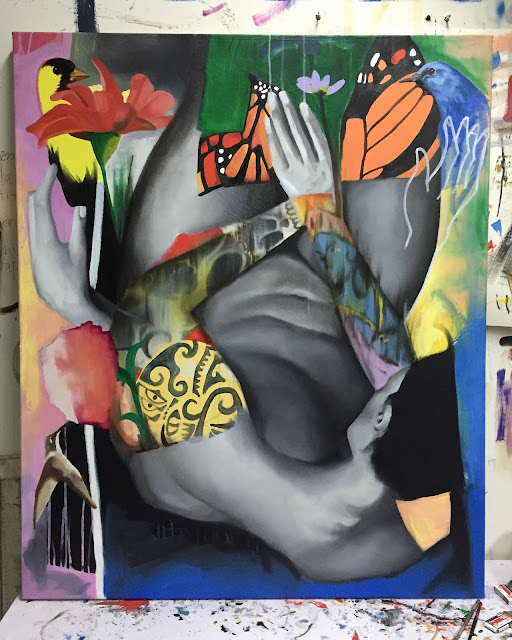 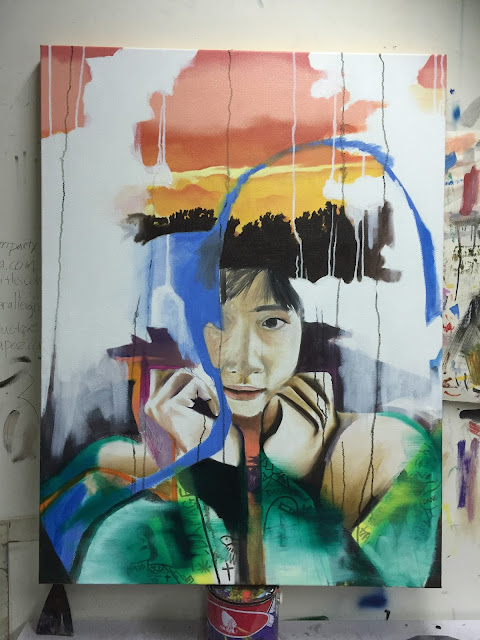 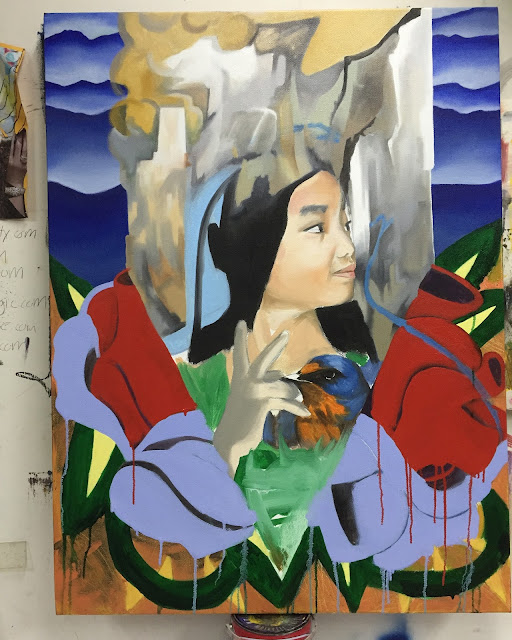 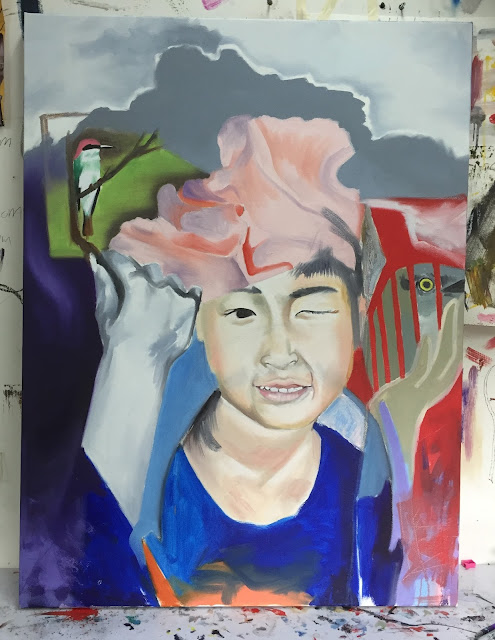 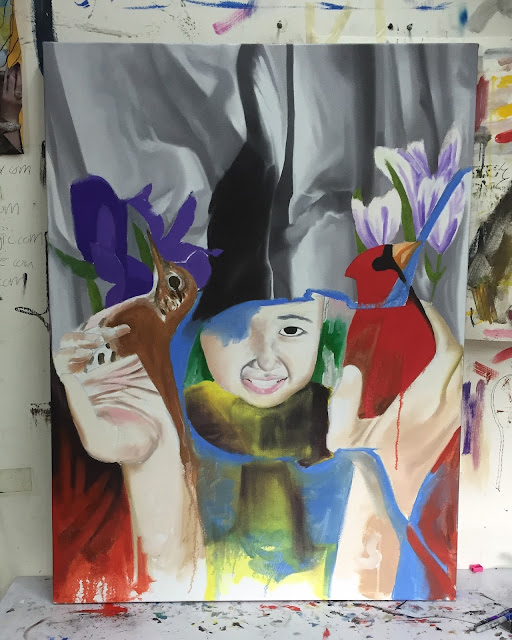 These are oil, spray paint, and copper leafing on board. I'm not sure what to do with these yet: 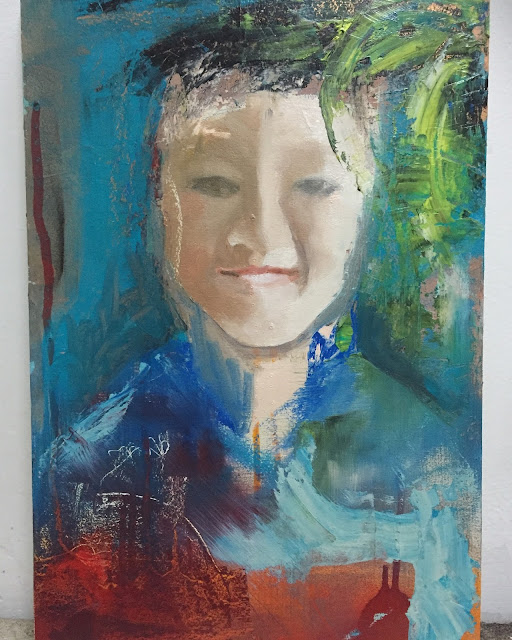 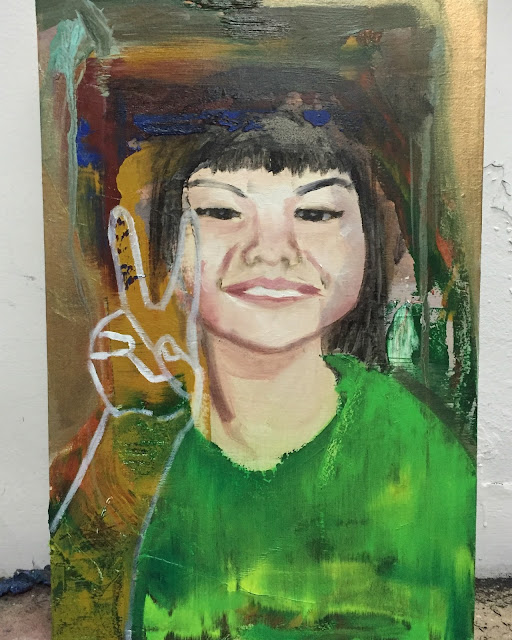 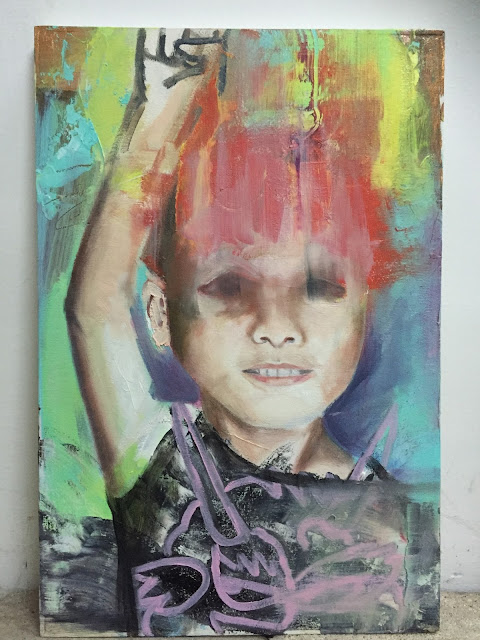 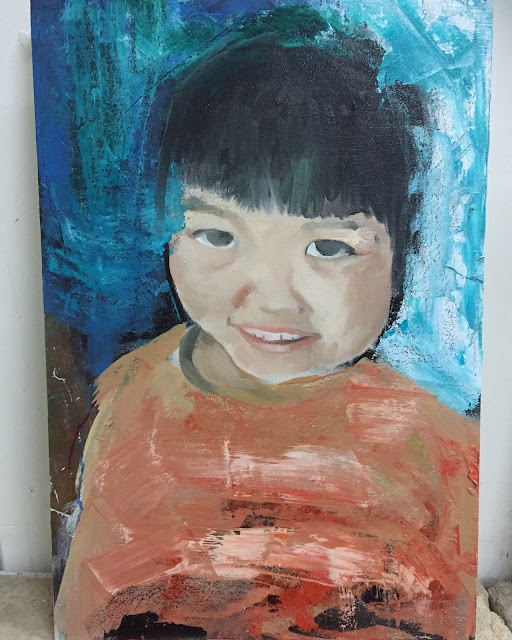 I've also resurrected an old practice of what I call "warm up paintings." When I still had a studio in California, I would often make Richter-esque abstracts before starting my figure, portrait type work.
It was a way to loosen up and since restarting it here, I have given more thought as to how to combine the two styles. Here are some samples: 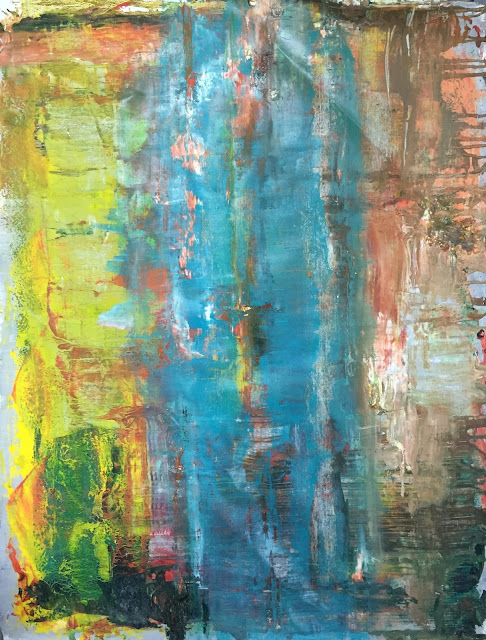 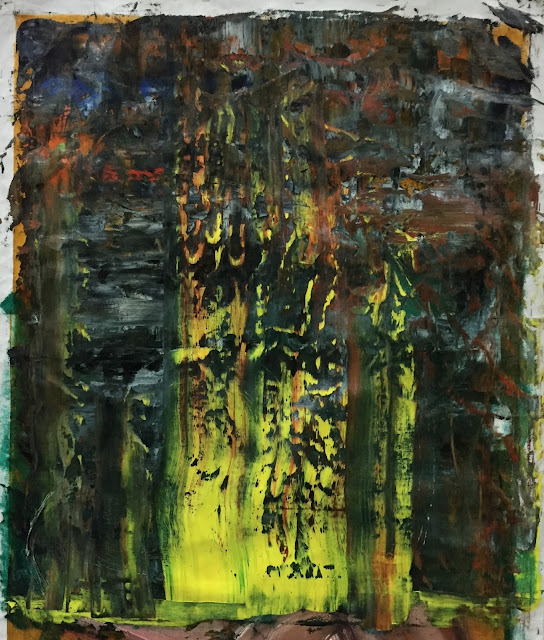 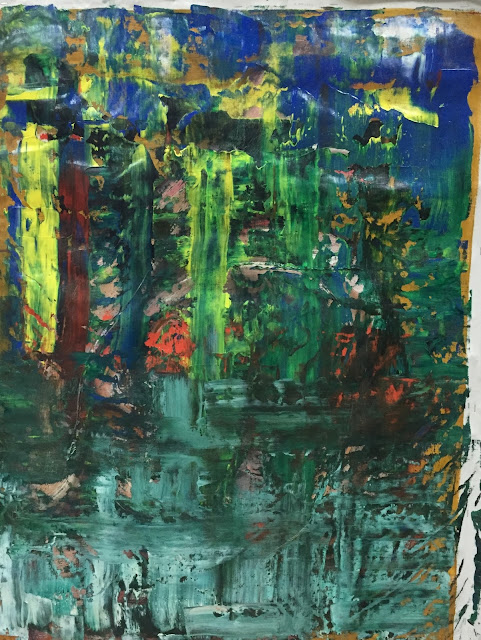 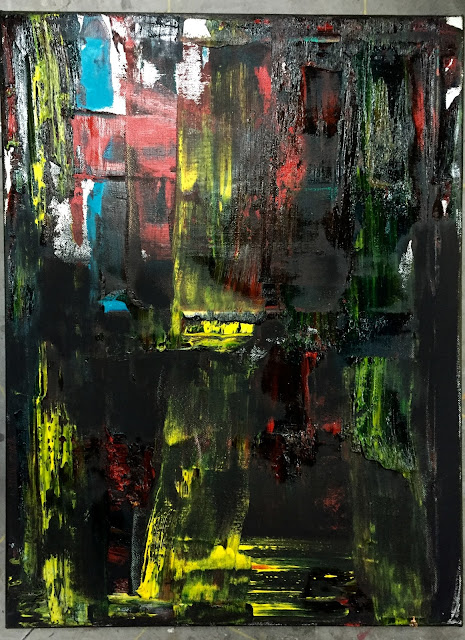 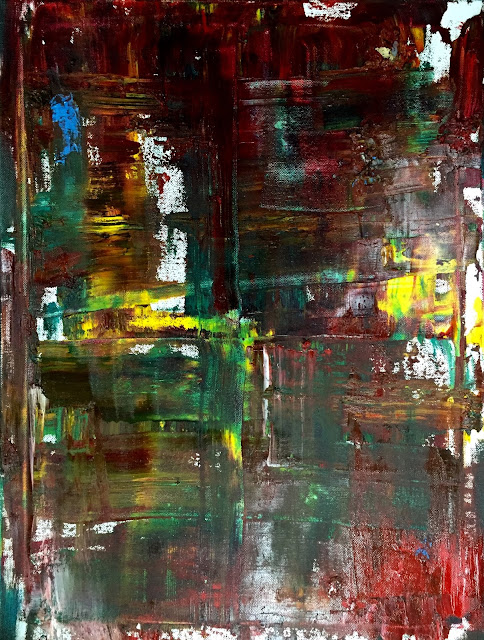 That's it for now. More next month.
Posted by Jeff Musser at 7:29 AM No comments: