Anyone Can Be An Amateur Shit-Doodling Hooligan!

The 30 Harshest Artist-on-Artist Insults In History

Like so many other things on the internet, I found this by accident then new I instantly had to share it. It was originally posted on of Flavorwire by Marina Galperina and I hope you enjoy it as much as I did.

Looks like the battle of egos will never go away!
Here are 30 harshest historical and contemporary artist-on-artists insults.

“Completely idiotic critics have for several years used the name of Piet Mondrian as though he represented the sum mum of all spiritual activity. They quote him in every connection. Piet for architecture, Piet for poetry, Piet for mysticism, Piet for philosophy, Piet’s whites, Piet’s yellows, Piet, Piet, Piet… Well, I Salvador, will tell you this, that Piet with one ‘i’ less would have been nothing but pet, which is the French word for fart.”

3. Marc Chagall on Pablo Picasso:
“What a genius, that Picasso… It’s a pity he doesn’t paint.”

“He bores me. He ought to have stuck to his flying machines.”

6. Linder Sterling on Damien Hirst:
“Dead butterflies, cows, horses, humans, sheep, and sharks — it reads like the inventory of a funerary Noah. How many halved calves suspended in formaldehyde does the world need? To my way of thinking, none.”

“I wouldn’t have noticed it except that it was so big.”

“The silence of Marcel Duchamp is overrated. It has become the territory of a few intellectuals, far from the life of people.”

“Many of us can draw a phallus with our eyes closed, but to create something serious? That’s hard, that needs to be studied. Anyone can be an amateur shit-doodling hooligan. It’s unpleasant and casts a shadow on all serious artists.”

10. Frida Kahlo on the European Surrealists:

“They are so damn ‘intellectual’ and rotten that I can’t stand them anymore… I’d rather sit on the floor in the market of Toluca and sell tortillas, than have anything to do with those ‘artistic’ bitches of Paris.”

“Jackson Pollock’s paintings might be very pretty but they’re just decoration. I always think they look like old lace.”

“Picasso is altogether bad, completely beside the point from the beginning except for Cubist period and even that half misunderstood…. Ugly. Old-fashioned vulgar without sensitivity, horrible in color or non-color. Very bad painter once and for all.”

“To my eye Ruben’s coloring is most contemptible. His shadows are of a filthy brown somewhat the color of excrement.”

“I’ve never liked his things very much, except the very, very early things… I loathe them. I can never see what there is to it, with all those squalid little forms. I can’t bear the drawings either — I absolutely hate his line. I find his line sickly.”

“Never heard of you.”

“Everything he knew, he learned from me.”

“He finished modern art at one blow by outuglying, alone, in a single day, the ugly that all others combined turned out in several years.”

“I never in my life saw more horrible things. They do not observe drawing nor form but give you an impression of what they call nature. It was worse than the Chamber of Horrors.”

20. Claude Monet on the French Realists:

“Poor blind idiots! They want to see everything clearly, even through fog!”

21. John Lurie on Julian Schnabel in the painting Hittites Attacking The Schnabel: 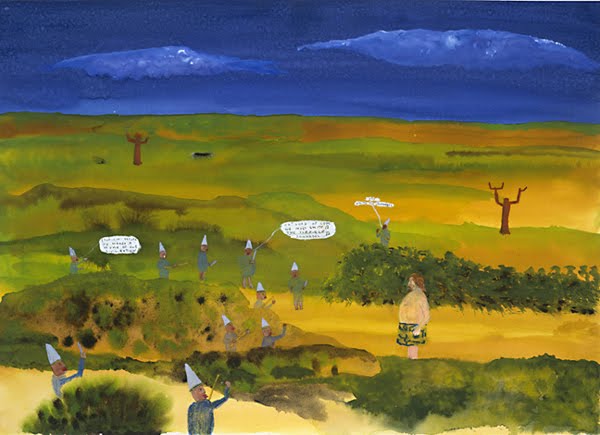 22. Andy Warhol on Julian Schnabel (in his diary):

“Julian Schnabel called and said he was coming by with that rock person, Captain Beefheart. And we didn’t want him to, and then I got worried that Julian might have heard what I’d been saying about him — that he goes around to other artists’ studios to find things to copy.”

“I began a happening in New York by announcing in front of three thousand spectators that Cézanne was a catastrophe of awkwardness — a painter of decrepit structures of the past. I was applauded, principally because nobody knew who Cézanne was.”

“Carvaggio’s art is painting for lackeys. This man has come into the world to destroy painting.”

“He will never be anything but a dauber.”

26. Salvador Dalí on Jackson Pollock’s style:
“…The indigestion that goes with fish soup…” 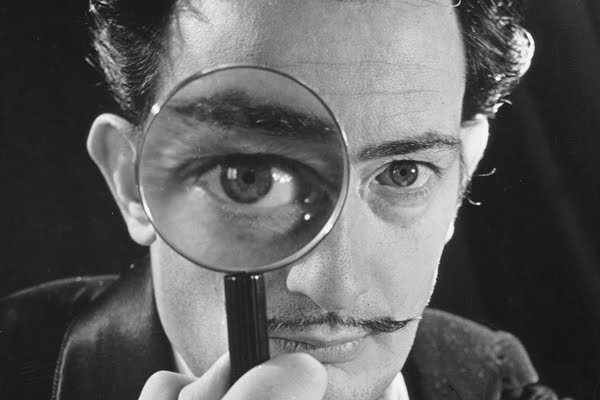 27. Gustave Courbet on Edouard Manet’s Olympia:
“It’s flat, it is isn’t modeled. It’s like the Queen of Hearts after a bath.”

28. Frederic Leighton on James McNeil Whistler:
“My dear Whistler, you leave your pictures in such a sketchy, unfinished state. Why don’t you ever finish them?”

29. James McNeil Whistler on Frederic Leighton:
“My dear Leighton, why do you ever begin yours?”

30. Anonymous vandal on Shepard Fairey (and my personal favorite):